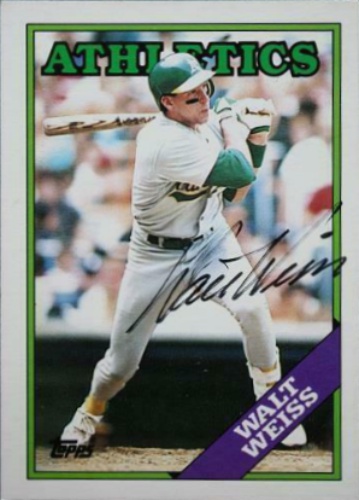 Walter William Weiss (born November 28, 1963) is an American former professional baseball shortstop and manager and current bench coach for the Atlanta Braves. He played in Major League Baseball (MLB) from 1987 through 2000 for the Oakland Athletics, Florida Marlins, Colorado Rockies, and Atlanta Braves. He managed the Rockies from 2013 through 2016. More about Walt Weiss

Current items with a signature of Walt Weiss

These are the most current items with a signature of Walt Weiss that were listed on eBay and on other online stores - click here for more items.

Traded items with a signature of Walt Weiss

The most expensive item with a signature of Walt Weiss (Walt Weiss Autographed Signed 2021 World Series Baseball Atlanta Braves RARE!!) was sold in March 2022 for $299.99 while the cheapest item (1994 Fleer Walt Weiss Autograph Florida Marlins Card# 480) found a new owner for $0.01 in November 2021. The month with the most items sold (9) was July 2013 with an average selling price of $9.99 for an autographed item of Walt Weiss. Sold items reached their highest average selling price in September 2017 with $68.00 and the month that saw the lowest prices with $0.99 was March 2010. In average, an autographed item from Walt Weiss is worth $5.99.

Most recently, these items with a signature of Walt Weiss were sold on eBay - click here for more items.

Watch: Walt Weiss believes Jon Gray gives Rockies best chance to win (03/24/15): Denver Post Columnist Mark Kiszla made his case for why the Colorado Rockies should get minor league pitcher Jonathan Gray in the lineup sooner rather than later.

Q&A with Rockies manager Walt Weiss: "Too much has been made of the 100-pitch th (03/09/15): In a question-and-answer session with The Denver Post, Walt Weiss discussed his views on the Rockies, who start spring training later this week.

Rockies' Walt Weiss: 'Wilin Rosario very serviceable at first' (02/2015): The Rockies are counting on catcher Wilin Rosario to be able to play some first base in 2015.

Rockies lose, but Walt Weiss believes '15 will be big for Eddie Butler (09/2014): LOS ANGELES — Eddie Butler showed up at spring training as the Rockies' phenom. Some fans — and some media members — clamored for his instant ascension into the starting

Walt Weiss pulls the plug on Yohan Flande’s start for Rockies at Washington (06/2014): Between the lines of another Rockies loss -- their 12th loss over the past 14 games -- was a good pitching performance from Yohan Flande.

Wilin Rosario awaits results of MRI on hand, Walt Weiss hopes for best (04/2014): Rockies catcher Wilin Rosario continues to get treatment on his sore left hand and is hoping he'll dodge a trip to the disabled list. He had an MRI Monday.

Rockies' Walt Weiss hasn't decided upon his final roster yet (03/2014): Walt Weiss will meet with his coaching staff and the front office Wednesday. It is a drill the Rockies have repeated multiple times as they look to finalize their roster, possibly after the game against the Giants on Wednesday.

Can Rockies go from "worst to first" — Walt Weiss' words — next year? (12/2013): Lunch Special: Each weekday near noontime, a Denver Post sports writer dares to dish. In this installment, Patrick Saunders looks at the Rockies' chances of winning their first-ever division title next year.

Walt Weiss gets extension with Rockies (10/2013): The Colorado Rockies finished the 2013 season with another last place finish. However, the last place finish didn’t stop them from giving manager Walt Weiss a three-year contract on Tuesday. read more

Frei: Walt Weiss at home in Rockies' dugout (09/2013): At one point during my week-long shadowing of Weiss and the Raiders in the spring of 2012, I asked if he would consider going back to a major-league dugout.

Dante Bichette, Walt Weiss not about to panic over Rockies' offense (07/2013): They aren't bringing in Pharrell or Mark McGwire. When it comes to producing hits, the Rockies' offense is on its own.

Walt Weiss Making The Most Of His Rookie Season As Rockies Manager (05/2013): So far most of the things that have happened to the Rockies have been good things – they’re playing far better than most expected, although Weiss was a believer from day one.

Walt Weiss was born to run the Colorado Rockies (03/2013): Raised in upstate New York, where he would eventually become a star for the Suffern High School Mounties, Walt Weiss was a field rat.

Celebrity house for sale: Walt Weiss (11/2012): Colorado Rockies' manager and '88 MLB rookie of the year Walt Weiss is selling his 73- acre Colorado estate for $3.5 million, according to Realtor.com.

Frei: Walt Weiss a "compromise," but a solid one for Rockies (10/2012): For the Rockies, Walt Weiss represents a compromise. He has ties to the Rockies and has worked with Dan O'Dowd and Bill Geivett