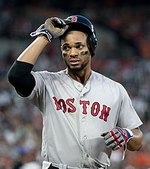 Current items with a signature of Xander Bogaerts

These are the most current items with a signature of Xander Bogaerts that were listed on eBay and on other online stores - click here for more items.

Traded items with a signature of Xander Bogaerts

If you're interested in Xander Bogaerts Rookie cards you might want to take a look at our sister site that specializes in Baseball Rookie Cards only.

Most recently, these items with a signature of Xander Bogaerts were sold on eBay - click here for more items.

Red Sox's Xander Bogaerts says he's received assurance team won't trade him befo (07/29/22): Bogaerts was told by the organization he'll remain in Boston for the rest of the season

Bloom: No plans for Bogaerts, Devers trade talks (07/28/22): Red Sox chief baseball officer Chaim Bloom said Wednesday that the team hasn't discussed trading All-Stars Xander Bogaerts or Rafael Devers at the deadline, and "we're not planning to discuss them with anybody."

Bogaerts back in Red Sox lineup after leg injury (07/06/22): Two days after receiving seven stitches to close a gash in his left thigh, Red Sox shortstop Xander Bogaerts is back in the lineup for Boston to try to help his team extend a five-game home win streak against the Tampa Bay Rays.

Red Sox SS Bogaerts out with thigh laceration (07/2022): Red Sox shortstop Xander Bogaerts will not be in the starting lineup for Monday's game against Tampa Bay after leaving a day earlier with a cut on his left thigh that required seven stitches.

'He's here now': Xander Bogaerts, Trevor Story making the best of an awkward sit (05/2022): Bogaerts' future in Boston is uncertain -- and his new double-play partner just might be his replacement.

Advanced metrics can't quantify what Xander Bogaerts means to the Red Sox (03/2022): The analytics suggest he's a below average shortstop defensively, but as our John Tomase writes, Xander Bogaerts' value to the Boston Red Sox is immeasurable.

Red Sox positional outlook: Xander Bogaerts' future at shortstop, and more (12/2021): How much longer will Xander Bogaerts be the Red Sox' shortstop? Who will play second base in 2022? Let's take a look at the middle infield situation for 2022 and beyond.

Red Sox to evaluate futures of Devers, Bogaerts (10/2021): Alex Cora would not commit when asked if shortstop Xander Bogaerts and third baseman Rafael Devers will stick to playing their current positions.

Xander Bogaerts on Super League drama after John Henry's Liverpool withdraws: 'I (04/2021): Bogaerts was not a fan of the proposed idea

MLB Buy or Sell: Red Sox's Xander Bogaerts hot start; Astros and A's in a two-te (08/2020): Should we buy into Bogaerts' hot start? What about the AL West -- are the A's a contender for the division crown?

Mets hot stove: Are Mets waiting on Red Sox shortstop Xander Bogaerts? (11/2014): The Red Sox have been on a spending spree this week, signing Hanley Ramirez and Pablo Sandoval. It's created a glut of position players in Boston.

Stock Watch: Xander Bogaerts' plate discipline struggles no surprise, but Red So (10/2014): Congratulations! Your weather is set to . You can change the location at any time. Don't have an account?

Xander Bogaerts Returns To Red Sox Lineup, Will Bat Eighth (08/2014): Xander Bogaerts is back in the Boston Red Sox’s lineup for their game Saturday night...

Xander Bogaerts Has 298 Plate Appearances in the Majors -- His Most Recent is th (05/2014): This edition of Nine Innings includes a look at Bogaerts's breakthrough, a plea of patience for Jackie Bradley, and a question: Which Red Sox player will make for the best broadcaster?

Heyman On Gresh & Zo: Red Sox Committed To Xander Bogaerts At Shortstop (04/2014): The 21-year-old shortstop has made his fair share of blunders so far in his first full season in the big leagues, but the Red Sox are committed to him at the position and will endure the growing pains right along with him, according to Jon Heyman.

Xander Bogaerts will be in the spotlight as the Red Sox shortstop (02/2014): FORT MYERS, Fla. -- Just three weeks past his 21st birthday, Xander Bogaerts stood on baseball’s biggest stage for the first time and showed he belonged.