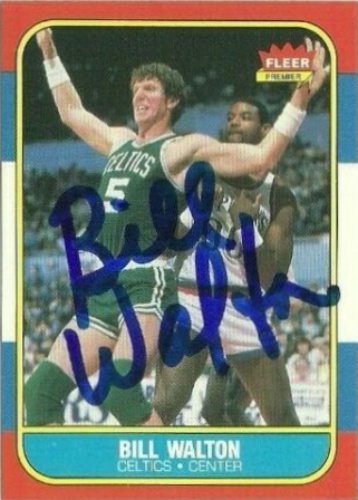 William Theodore Walton III (born November 5, 1952) is an American television sportscaster and former professional basketball player. He played college basketball for coach John Wooden and the UCLA Bruins, winning three consecutive national college player of the year awards (1972–1974), while leading UCLA to NCAA championships in 1972 and 1973 and an 88-game winning streak. After being selected as the first overall pick in the 1974 NBA draft, Walton led the Portland Trail Blazers to an NBA championship in 1977, earning the NBA Finals Most Valuable Player Award that season. He won another NBA title with the Boston Celtics in 1986. Walton was inducted into the Naismith Memorial Basketball Hall of Fame in 1993. He was named to the NBA's 50th and 75th anniversary teams. More about Bill Walton

Current items with a signature of Bill Walton

These are the most current items with a signature of Bill Walton that were listed on eBay and on other online stores - click here for more items.

Traded items with a signature of Bill Walton

If you're interested in Bill Walton Rookie cards you might want to take a look at our sister site that specializes in Basketball Rookie Cards only.

The most expensive item with a signature of Bill Walton (Bill Walton Autographed 1974 Topps Basketball Rookie Card PSA DNA Signed Auto) was sold in January 2022 for $999.99 while the cheapest item (BILL WALTON UCLA Bruins HOF 1993 Hand Signed Autograph 4X6 Postcard Photo Auto) found a new owner for $0.01 in August 2013. The month with the most items sold (52) was August 2022 with an average selling price of $26.99 for an autographed item of Bill Walton. Sold items reached their highest average selling price in December 2013 with $75.00 and the month that saw the lowest prices with $6.00 was October 2012. In average, an autographed item from Bill Walton is worth $25.00.

Most recently, these items with a signature of Bill Walton were sold on eBay - click here for more items.

UCLA legend Bill Walton against Bruins joining Big Ten: 'I don't like this attem (11/02/22): Walton said that he hopes the imminent move would be 'rescinded'

Walton hopes UCLA move to Big Ten is 'rescinded' (11/01/22): Basketball Hall of Famer Bill Walton opposes his alma mater UCLA's move to the Big Ten, saying Tuesday that he doesn't believe the move is in the Bruins' best interest and hopes it "will be rescinded."

The legend of Boston Celtics champion center Bill Walton – the NBA’s greatest ‘W (05/12/22): Check out this account of one of Boston's best bigs to suit up for the Celtics.

Seen and heard: Arizona's McKale streak falls, Bill Walton collects more hardwar (12/16/18): The Baylor Bears pulverized Arizona on the glass at McKale Center on Saturday, outrebounding the Wildcats 51-19 and handing UA its first home nonconference loss since 2011. Below are some

Bill Walton, former Portland Trail Blazers center, talks about 'being milked,' M (03/2015): Congratulations! Your weather is set to . You can change the location at any time. Don't have an account?

Scott Walker's lack of degree, Bill Walton's lack of filter spark this week's to (12/2014): Here are the top 10 stories of the week at captimes.com.

Hall of Famer Bill Walton a big fan of Ute coach Larry Krystkowiak (11/2014): Hall of Famer and Pac-12 television analyst appreciates what Utah's coach does on and off the court.

Chasing Bill Walton, the biggest man in Trail Blazers history (10/2014): Congratulations! Your weather is set to . You can change the location at any time. Don't have an account?

Arizona State Fans Storm Court Prematurely in Upset of Arizona, Annoy Bill Walto (02/2014): “This is not safe, it’s not safe for anybody.” Bill Walton

What The Hell Is Bill Walton Talking About? (01/2014): Poor Dave Pasch. The ESPN college basketball play-by-play artist is repeatedly stuck with an increasingly unhinged Bill Walton , and last night's broadcast of the Arizona-UCLA game at Pauley Pavilion got weird again as Walton rambled on about who-knows-what. Read more...

Bill Walton promotes new type of back surgery in Eagle County (07/2013): Special to the Daily Basketball Hall of Famer Bill Walton will be on the Colorado-Eagle River Ride course, riding the 42 mile route. After completing his basketball career, Walton became an avid cyclist.

Ex-NBA star Bill Walton, former MMA star Nate Quarry are models of success for s (06/2013): In February 2008, Bill Walton's back pain reached the point of ruining his life. A career filled with operations took its toll and pulled him from the broadcast booth. "I no longer could move," he said.

Bill Walton's walks down memory lane lead nowhere (02/2013): TV analyst Bill Walton can be funny in person, but his commentary during games can also be perplexing.

Bill Walton on suicide, his return; John Hollinger's new job (12/2012): At the worst moments, when the back pain was so great and his mind filled with thoughts of suicide, Bill Walton had a horrible thought: He might actually live.

Bill Walton comes to Gastonia back pain-free (11/2012): Bill Walton visits Gastonia Thursday night to talk about returning from terrible back pain in a free educational seminar open to the public.

Bill Walton Will Announce Pac-12 Games for ESPN Next Season (07/2012): This news is far from terrrrrrrrrrrrible.

Bill Walton wishes he could have helped Junior Seau (05/2012): Basketball great Bill Walton told the San Diego Union-Tribune that he regrets not being able to help his friend, Junior Seau, before it was too late.

Jim Gray and Bill Walton Had a Brief, Interesting Discussion About John Calipari (04/2012): So Bill, does the Fab 5 exist?

Bill Walton delivers at LifePath event (11/2011): Former basketball star puts everyone in holiday mood with message of faith, patience, support. I intended to ask Bill Walton about all of the great teams he played on at UCLA or what it was it like to shoot 21-for-22 and score 44 points in an NCAA championship game.

Off the Dribble: 30 Seconds With Bill Walton (04/2011): The Hall of Fame center Bill Walton won championships at U.C.L.A. and with the Boston Celtics in a career that was hampered by injuries.

Bill Walton gushes about Green, then and now (02/2011): SACRAMENTO, Calif. - After filling in for Tommy Heinsohn on Celtics TV for the first two games of the road trip...

Bill Walton remembers the streak that may soon be matched by UConn (12/2010): LOS ANGELES — The date is burned in Bill Walton’s memory. He spits it out with distaste when asked what he recalls most about UCLA’s NCAA-record 88-game winning streak.