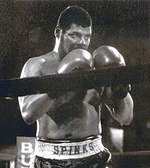 Leon Spinks (born July 11, 1953) is an American former professional boxer who competed from 1977 to 1995. In only his eighth professional fight, he won the undisputed heavyweight championship in 1978 after defeating Muhammad Ali in a split decision, in what was considered one of the biggest upsets in boxing history. Spinks was later stripped of the WBC title for facing Ali in an unapproved rematch seven months later, which he lost by unanimous decision. More about Leon Spinks

Current items with a signature of Leon Spinks

These are the most current items with a signature of Leon Spinks that were listed on eBay and on other online stores - click here for more items.

Traded items with a signature of Leon Spinks

The most expensive item with a signature of Leon Spinks (MUHAMMAD ALI & LEON SPINKS AUTOGRAPHED-SIGNED VINTAGE 1978 FIGHT PROGRAM PSA/DNA) was sold in June 2012 for $999.99 while the cheapest item (Original Leon Spinks Autographed Boxing Poster) found a new owner for $0.01 in April 2011. The month with the most items sold (18) was March 2011 with an average selling price of $1.96 for an autographed item of Leon Spinks. Sold items reached their highest average selling price in April 2015 with $150.00 and the month that saw the lowest prices with $0.99 was November 2016. In average, an autographed item from Leon Spinks is worth $14.95.

Most recently, these items with a signature of Leon Spinks were sold on eBay - click here for more items.

From the Archive: 'I’ve solved the Spinks riddle' says Ali - The Ring (06/03/17): We travel back to 1978 and discover Muhammad Ali's plans for training camp ahead of his second fight with Leon Spinks, which was dubbed "Battle of New Orleans".

Boxing Legend Leon Spinks -- Finally Out of the Hospital ... After Chicken Bone (01/19/15): Leon Spinks has ALMOST conquered the chicken bone that nearly killed him -- because he's finally out of the hospital and recovering at a rehab center ... TMZ Sports has learned. We broke the story ... the boxing legend underwent several major…

Boxer Leon Spinks Recovering From Health Crisis In Rehab Centre (01/19/15): Boxing legend Leon Spinks is recovering at a rehabilitation centre after enduring multiple surgeries and a lengthy hospital stay stemming from a freak accident at home.

Leon Spinks -- I'm Off My Liquid Diet ... Just In Time for Thanksgiving! (11/27/14): Leon Spinks' recovery from a nasty intestinal issue has taken a turn for the better ... and the timing couldn't be more perfect!!As we previously reported, the boxing legend was hospitalized after a chicken bone got caught in his intestine ...…

This spinks: Leon Spinks refuses to talk to Johnny B. (09/2013): After a 4 AM call to the Las Vegas home of former boxer Leon Spinks, his significant other refuses to let him on the air with Johnny. Listen as JB, Buzz and Harry break down the call to see where …

“Neon” Leon Spinks Today: A Tragic Sight (05/2012): Ever since I’ve been interested in boxing I’ve found the Leon Spinks story to be a fascinating thing.