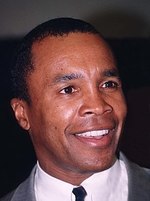 Ray Charles Leonard (born May 17, 1956), best known as "Sugar" Ray Leonard, is an American former professional boxer, motivational speaker, and occasional actor. Often regarded as one of the greatest boxers of all time, he competed from 1977 to 1997, winning world titles in five weight divisions; the lineal championship in three weight divisions; as well as the undisputed welterweight title. Leonard was part of "The Fabulous Four", a group of boxers who all fought each other throughout the 1980s, consisting of Leonard, Roberto Durán, Thomas Hearns, and Marvin Hagler. More about Ray Leonard

Current items with a signature of Ray Leonard

These are the most current items with a signature of Ray Leonard that were listed on eBay and on other online stores - click here for more items.

Traded items with a signature of Ray Leonard

The most expensive item with a signature of Ray Leonard (Leroy Neiman SIGNED 1981 TOM HITMAN HEARNS VS SUGAR RAY LEONARD FIGHT TICKET) was sold in September 2020 for $499.00 while the cheapest item (Team Sugar Ray Leonard Boxing Signed Shirt Size XXL New With Tag) found a new owner for $0.99 in November 2020. The month with the most items sold (38) was July 2020 with an average selling price of $54.44 for an autographed item of Ray Leonard. Sold items reached their highest average selling price in March 2015 with $250.00 and the month that saw the lowest prices with $9.95 was July 2016. In average, an autographed item from Ray Leonard is worth $39.95.

Most recently, these items with a signature of Ray Leonard were sold on eBay - click here for more items.

Arum: Crawford is Best Welterweight Since Sugar Ray Leonard (01/15/19): Amir Khan will challenge the outstanding WBO welterweight champion Terence Crawford on April 20. The 32-year-old rejected terms to finally meet his rival Kell Brook to instead pursue one of the world's finest fighters and what could prove his defining fight at either Las Vegas' MGM Grand or Madison