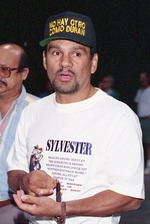 Roberto Durán Samaniego (born June 16, 1951) is a Panamanian former professional boxer who competed from 1968 to 2001. He held world championships in four weight classes: lightweight, welterweight, light middleweight and middleweight, as well as reigns as the undisputed and lineal lightweight champion, and the lineal welterweight champion. He is also the second boxer to have competed over a span of five decades, the first being Jack Johnson. Durán was known as a versatile, technical brawler and pressure fighter, which earned him the nickname of "Mano de Piedra" ("Hand of Stone") for his formidable punching power and excellent defense. More about Roberto Duran

Current items with a signature of Roberto Duran

These are the most current items with a signature of Roberto Duran that were listed on eBay and on other online stores - click here for more items.

Traded items with a signature of Roberto Duran

The most expensive item with a signature of Roberto Duran (Roberto Duran Super WBA Signed World Boxing Association Gilberto Mendoza Belt) was sold in February 2020 for $651.66 while the cheapest item (Roberto Durán is a Panamanian former pro boxer Hand Signed 10 x 8 Photo) found a new owner for $0.99 in April 2019. The month with the most items sold (35) was May 2020 with an average selling price of $41.00 for an autographed item of Roberto Duran. Sold items reached their highest average selling price in December 2020 with $219.99 and the month that saw the lowest prices with $4.14 was November 2011. In average, an autographed item from Roberto Duran is worth $26.69.

Most recently, these items with a signature of Roberto Duran were sold on eBay - click here for more items.

Why Pacquiao would beat Mayweather, according to boxing legend Roberto Duran (01/27/15): Roberto Duran has studied both Floyd Mayweather and Manny Pacquiao closely, and the Hall of Fame boxer from Panama sees a decided edge for the Filipino ring icon should the two finally mix it up in the ring.

Roberto Duran is Busted in OC! No, Not the "No Mas" Boxer, the Alleged Loan-Mod (05/26/14): Just to make it clear from the outset, the Roberto Duran who along with six others was indicted in what Orange County prosecutors call the biggest loan modification scam in the country IS NOT R...

Roberto Duran in Portland for Expo's boxing rebirth (11/2013): The rebirth of pro boxing at the Portland Expo just a got a little bit more historic. On top of hosting an event for the first time in 21 years, all-time boxing great Roberto Duran will be apart of the event.

Panama's Ruben Blades joins cast of movie about fellow countryman boxer Roberto (05/2013): PANAMA CITY - Panama's most famous performer is joining the cast of a movie about its most famous boxer.

June 1972: When Roberto Duran Streaked Like A Comet Across the Boxing Sky (06/2012): by Pete Madzelan : He came like a streaking comet across the boxing sky...a flash—a bright brillance that had onlookers not quite knowing what they witnessed, but all agreeing that it was something special.

COLORFUL FIGHTERS NASEEM HAMED, ROBERTO DURAN ON AKTV 'SUPER FIGHTS' (12/2011): Two of the most colorful fighters in the history of boxing, cocky Prince Naseem Hamed of Britain and one of the all-time greats Roberto Hands of St ...

EXCLUSIVE: In one corner, Trev from down the road. In the other, former champion (10/2011): Roberto Duran versus Trev Norton in the Vault of Dreams, Lower Kersal Social Club, Salford. That was the mismatch that took place in a sporting theatre as far removed from Caesars Palace as it is possible to imagine. Outside, the rain cast a dreary smear over the Coronation Street terraces.