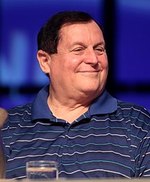 Burt Ward (born Bert John Gervis Jr. /ˈdʒɜːrvɪs/, July 6, 1945) is an American actor, animal rights activist and businessman. He is best known for his portrayal of Dick Grayson's Robin, the sidekick of Batman (played by Adam West), in the television series Batman (1966–1968), its theatrical feature film, the Saturday morning animated series The New Adventures of Batman (1977), the two-episode pilot Legends of the Superheroes (1979), the animated reunion films Batman: Return of the Caped Crusaders (2016) and Batman vs. Two-Face (2017), and the live-action television event Crisis on Infinite Earths (2019). More about Burt Ward

Current items with a signature of Burt Ward

These are the most current items with a signature of Burt Ward that were listed on eBay and on other online stores - click here for more items.

Traded items with a signature of Burt Ward

The most expensive item with a signature of Burt Ward (BATMAN signed guitar-Adam West,Burt Ward,Julie Newmar,Lee Meriwether COA Beckett) was sold in February 2021 for $5799.00 while the cheapest item (KATHY KERSH BATMAN CORNELIA ADAM WEST BURT WARD SIGNED 4X6 PHOTO) found a new owner for $2.00 in November 2020. The month with the most items sold (12) was January 2016 with an average selling price of $120.63 for an autographed item of Burt Ward. Sold items reached their highest average selling price in February 2022 with $1999.99 and the month that saw the lowest prices with $6.99 was July 2019. In average, an autographed item from Burt Ward is worth $90.50.

Most recently, these items with a signature of Burt Ward were sold on eBay - click here for more items.