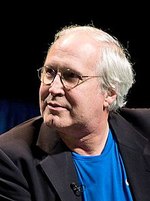 Cornelius Crane "Chevy" Chase (/ˈtʃɛvi/; born October 8, 1943) is an American comedian, writer, and actor. Born into a prominent family, he had a variety of jobs before moving into comedy and started acting with National Lampoon. He became a key cast member in the first season of Saturday Night Live, where his recurring Weekend Update segment became a staple of the show. As both a performer and a writer, he earned three Primetime Emmy Awards out of five nominations. More about Chevy Chase

Current items with a signature of Chevy Chase

These are the most current items with a signature of Chevy Chase that were listed on eBay and on other online stores - click here for more items.

Traded items with a signature of Chevy Chase

The most expensive item with a signature of Chevy Chase (Bill Murray Chevy Chase signed Autographed Beckett BAS COA Caddyshack Flag Webb) was sold in December 2020 for $1999.00 while the cheapest item (Chevy Chase SIGNED AUTOGRAPHED SNL 8 x 10 photo Weekend Update NM+) found a new owner for $0.01 in July 2021. The month with the most items sold (12) was November 2017 with an average selling price of $84.00 for an autographed item of Chevy Chase. Sold items reached their highest average selling price in September 2021 with $289.00 and the month that saw the lowest prices with $1.26 was December 2015. In average, an autographed item from Chevy Chase is worth $46.50.

Most recently, these items with a signature of Chevy Chase were sold on eBay - click here for more items.

Chevy Chase's New TV Show Gets Big Name Change As Beverly D'Angelo Dropped From (03/18/15): Although it hasn’t even premiered yet, there already seems to be drama on the set of Chevy Chase’s new TV show. The title for his new pilot “Chev and Bev,” co-starring his “National Lampoon's Vacation” wife Beverly D’Angelo, has been altered to just “Chevy.”

In Chevy Chase, a conundrum spouts from fountain named after a racist senator (12/2014): Community groups are split about whether to rename landmark named after a senator with racist views.

Value Added: Chevy Chase entrepreneur dispenses advice through Her Corner peer g (11/2014): Fred Irwin?s advice is for how to take your enterprise to the next level; from antiques to the advice business

House of the Week | Chevy Chase, Md., Georgian estate for $5.2M (10/2014): Built in 1905, Wirelawn has hosted parties for presidents, senators and other Washington elite and been home to an ambassador.

Road work to close lanes in Chevy Chase -- Gazette.Net (08/2014): The State Highway Administration expects to close lanes on Connecticut Avenue in Chevy Chase as workers finish a road resurfacing project. Crews are working on a stretch of road between Western Avenue and East-West Highway.