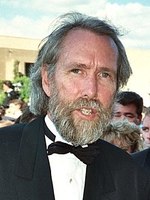 James Maury Henson (September 24, 1936 – May 16, 1990) was an American puppeteer, animator, cartoonist, actor, inventor, filmmaker, and screenwriter who achieved worldwide notice as the creator of The Muppets (1955–present) and Fraggle Rock (1983–1987); and as the director of The Dark Crystal (1982) and Labyrinth (1986). He was born in Greenville, Mississippi, and raised in Leland, Mississippi, and University Park, Maryland. More about Jim Henson

The most expensive item with a signature of Jim Henson (JIM HENSON Autographed Hand Signed Kermit the Frog Muppets Sketch Museum Framed) was sold on eBay in August 2014 for $1285.51 while the cheapest item (Vintage 1981 Jim Henson Seseme Street book AUTOGRAPH AUTO SIGNED COA GORGEOUS!!!) found a new owner for $0.99 in September 2013. The month with the most items sold (4) was October 2017 with an average selling price of $187.50 for an autographed item of Jim Henson. Sold items reached their highest average selling price in October 2019 with $599.99 and the month that saw the lowest prices with $9.99 was November 2013. In average, an autographed item from Jim Henson is worth $124.99.

Current items with a signature of Jim Henson

These are the most current items with a signature of Jim Henson that were listed on eBay and on other online stores - click here for more items.

Traded items with a signature of Jim Henson

Most recently, these items with a signature of Jim Henson were sold on eBay - click here for more items.

Jim Henson's son directing R-rated puppet film (06/26/12): What "Who Framed Roger Rabbit?" did for animated characters, Todd Berger hopes "The Happytime Murders" will do for puppets -- namely, take them off of the exclusive radar of children, and into adult storytelling.

New Muppet Show: BBC One, Jim Henson Partner For New Series (06/20/12): BBC One is at work on a new Muppet show. The series will feature a new cast of puppet characters and two celebrity guests. The celebrities will go head-to-head in a series of games run by the puppets and appear in sketches.