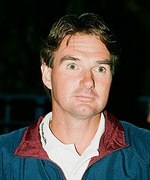 James Scott Connors (born September 2, 1952) is an American former world No. 1 tennis player. He held the top Association of Tennis Professionals (ATP) ranking for a then-record 160 consecutive weeks from 1974 to 1977 and a career total of 268 weeks. By virtue of his long and prolific career, Connors still holds three prominent Open Era men's singles records: 109 titles, 1,557 matches played, and 1,274 match wins. His titles include eight major singles titles (a joint Open Era record five US Opens, two Wimbledons, one Australian Open), three year-end championships, and 17 Grand Prix Super Series titles. In 1974, he became the second man in the Open Era to win three major titles in a calendar year, and was not permitted to participate in the fourth, the French Open. Connors finished year end number one in the ATP rankings from 1974 to 1978. In 1982, he won both Wimbledon and the US Open and was ATP Player of the Year and ITF World Champion. He retired in 1996 at the age of 43. More about Jimmy Connors

Current items with a signature of Jimmy Connors

These are the most current items with a signature of Jimmy Connors that were listed on eBay and on other online stores - click here for more items.

Traded items with a signature of Jimmy Connors

The most expensive item with a signature of Jimmy Connors (JIMMY CONNORS VITAS GERULAITIS SIGNED 8X10 PHOTO RARE AUTHENTIC 100% WIMBLEDON) was sold in January 2022 for $389.99 while the cheapest item (JIMMY CONNORS AUTOGRAPH SIGNED INDEX CARD 2/3/1979 SEE RETURN POLICY LOW BID $$$) found a new owner for $0.99 in February 2016. The month with the most items sold (3) was September 2017 with an average selling price of $19.00 for an autographed item of Jimmy Connors. Sold items reached their highest average selling price in January 2022 with $389.99 and the month that saw the lowest prices with $3.49 was April 2016. In average, an autographed item from Jimmy Connors is worth $19.00.

Most recently, these items with a signature of Jimmy Connors were sold on eBay - click here for more items.