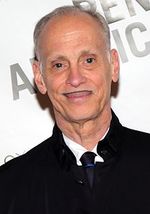 John Samuel Waters Jr. (born April 22, 1946) is an American filmmaker, writer, actor, and artist. He rose to fame in the early 1970s for his transgressive cult films, including Multiple Maniacs (1970), Pink Flamingos (1972), and Female Trouble (1974). He wrote and directed the comedy film Hairspray (1988), which was an international success and was adapted into a hit Broadway musical. He has written and directed other films, including Polyester (1981), Cry-Baby (1990), Serial Mom (1994), Pecker (1998), and Cecil B. Demented (2000). His films contain elements of post-modern comedy and surrealism. More about John Waters

Current items with a signature of John Waters

These are the most current items with a signature of John Waters that were listed on eBay and on other online stores - click here for more items.

Traded items with a signature of John Waters

The most expensive item with a signature of John Waters (General John Waters WWII POW Patton's Son in Law Typed Letter Signed TLS Ribbons) was sold in April 2017 for $729.99 while the cheapest item (PINK FLAMINGO PLASTIC SIGNED AUTOGRAPHED BY JOHN WATERS TIKI BAR FUN) found a new owner for $0.99 in June 2020. The month with the most items sold (7) was December 2021 with an average selling price of $37.90 for an autographed item of John Waters. Sold items reached their highest average selling price in October 2021 with $250.00 and the month that saw the lowest prices with $5.04 was March 2014. In average, an autographed item from John Waters is worth $34.98.

Most recently, these items with a signature of John Waters were sold on eBay - click here for more items.

John Waters Talks About His First Novel (05/13/22): The filmmaker and author’s latest book is “Liarmouth: A Feel-Bad Romance.”

John Waters’s First Novel Is Manic, Hyperbolic and Deviant. Surprised? (05/03/22): “Liarmouth” is about three generations of women in one family who plan to confront or kill one another. It also has a trampoline fun park.