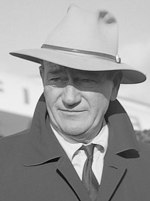 Marion Robert Morrison (May 26, 1907 – June 11, 1979), known professionally as John Wayne and nicknamed Duke, was an American actor and filmmaker who became a popular icon through his starring roles in films made during Hollywood's Golden Age, especially in Western and war movies. His career flourished from the silent era of the 1920s through the American New Wave, as he appeared in a total of 179 film and television productions. He was among the top box-office draws for three decades, and he appeared with many other important Hollywood stars of his era. In 1999, the American Film Institute selected Wayne as one of the greatest male stars of classic American cinema. More about John Wayne

Current items with a signature of John Wayne

These are the most current items with a signature of John Wayne that were listed on eBay and on other online stores - click here for more items.

Traded items with a signature of John Wayne

The most expensive item with a signature of John Wayne (THE GREATEST CELEBRITY AUTOGRAPH COLLECTION! ELVIS,JOHN WAYNE, EASTWOOD, SINATRA!!) was sold in July 2022 for $18799.00 while the cheapest item (PATRICK WAYNE Authentic Hand Signed Autograph 3X5 INDEX CARD - Dad is JOHN WAYNE) found a new owner for $0.01 in April 2021. The month with the most items sold (11) was May 2020 with an average selling price of $9.99 for an autographed item of John Wayne. Sold items reached their highest average selling price in May 2016 with $3282.00 and the month that saw the lowest prices with $0.99 was November 2019. In average, an autographed item from John Wayne is worth $110.00.

Most recently, these items with a signature of John Wayne were sold on eBay - click here for more items.

John Wayne's notorious 1971 Playboy interview resurfaces: 'I believe in white su (02/21/19): Snippets of an old Playboy interview that include racist and homophobic sentiments put the late actor back in the spotlight.

John Wayne’s old interview shocks everyone, here's why (02/21/19): Wayne’s 1971 interview to Playboy magazine has left a lot of people in a state of shock.

The Real Reason People Are Offended By John Wayne's 1971 Playboy Interview (02/20/19): The Playboy interview is 50 years old, but people are getting very upset over remarks John Wayne made about minorities.

John Wayne’s Racist ‘Playboy’ Interview From 1971 Resurfaces – Celebrities React (02/20/19): Academy-Award winning actor John Wayne (born Marion Morrison) may have been dead for about 40 years, but on Tuesday morning, he was trending on Twitter. After screenwriter Matt Williams posted screenshots of Wayne’s infamous 1971 Playboy interview and reminded his Twitter followers that Wayne was a

'I believe in white supremacy': 1971 Playboy interview with John Wayne draws fir (02/20/19): An almost 50-year-old interview which features the late actor espousing racist and homophobic views has gone viral after resurfacing on Twitter.

The Real Reason People Are Offended By John Wayne's 1971 Playboy Interview (02/2019): The Playboy interview is 50 years old, but people are getting very upset over remarks John Wayne made about minorities.

John Wayne Gacy Attraction Will Likely Draw Backlash (09/2014): John Wayne Gacy is a name synonymous with horror, which is why Rob Zombie included him in his Villa Park, Chicago haunted house. But that part of the attraction will likely draw the ire of some, and Zombie is prepared …

20 Years After Execution, John Wayne Gacy's Attorney Remembers His Final Days (05/2014): By the time Gacy was executed, Karen Conti and Greg Adamski invested a fortune in billable hours and a good portion of their mental health. [ more › ]

John Wayne partners up with classic cowboys in Savannah this weekend (06/2012): Howdy, partner. Three classic Westerns will be screened June 29 and 30 at the Lucas Theatre. "True Grit" --- the original 1969 version starring John Wayne as U.S. Marshal Rooster Cogburn --- will be shown at 7 p.m. Friday.