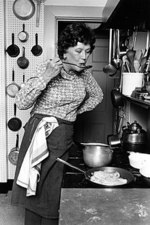 Julia Carolyn Child (née McWilliams; August 15, 1912 – August 13, 2004) was an American cooking teacher, author, and television personality. She is recognized for bringing French cuisine to the American public with her debut cookbook, Mastering the Art of French Cooking, and her subsequent television programs, the most notable of which was The French Chef, which premiered in 1963. More about Julia Child

Current items with a signature of Julia Child

These are the most current items with a signature of Julia Child that were listed on eBay and on other online stores - click here for more items.

Traded items with a signature of Julia Child

The most expensive item with a signature of Julia Child (Mastering the Art of French Cooking, Julia Child, Simone Beck, DOUBLE SIGNED) was sold in July 2022 for $1950.00 while the cheapest item (JULIA CHILD HAND SIGNED AUTOGRAPH PICTURE LOW PRICE!!!) found a new owner for $3.25 in June 2013. The month with the most items sold (24) was April 2022 with an average selling price of $205.00 for an autographed item of Julia Child. Sold items reached their highest average selling price in December 2017 with $475.00 and the month that saw the lowest prices with $3.25 was June 2013. In average, an autographed item from Julia Child is worth $79.99.

Most recently, these items with a signature of Julia Child were sold on eBay - click here for more items.

New Julia Child award will go to leader who influences American food (03/25/15): James Beard doesn’t get to give out all the awards. Not anymore. The Julia Child Foundation for Gastronomy and the Culinary Arts is launching a new award to honor a culinary leader.

Julia Child Foundation launching award in honor of namesake (03/24/15): The Julia Child Award, which will be awarded annually, will be presented to someone who has improved how Americans think about food and cooking. Read more

You can be part of the Julia Child Award (03/24/15): The design of the award will be chosen through a public competition; tickets for the gala will be on sale.

FOOD FINDS: Award named for Julia Child a tribute to how she revolutionized Amer (03/24/15): More than a decade after Julia Child's death, the foundation she created finally is launching a culinary award named in her honour. The annual award pays tribute to one of the United States' most influential cooks. With a writing and television career that spanned decades, Child is credited with

New Julia Child award will go to leader who influences American food (03/2015): James Beard doesn’t get to give out all the awards. Not anymore. The Julia Child Foundation for Gastronomy and the Culinary Arts is launching a new award to honor a culinary leader.

The New Food TV: The Era Of Julia Child Packed Its Knives And Went (10/2014): Since the original Japanese Iron Chef first appeared on the Food Network 15 years ago, how-to cooking shows have gradually been displaced by reality shows that pit chefs against each other.

Julia Child stamps and Andy Samberg burgers (09/2014): Andy Samberg is the latest celebrity to get an Umami burger homage. Meanwhile Burger King has turned its Japanese burgers the darkest shade of black. And the U.S. Postal Service is putting chefs on its stamps.

Julia Child On Wine, Food, And Spoiled People (08/2014): Julia Child may have put French food on the American culinary map, but wine?

Celebrating Letters from Julia Child (01/2014): As another part of the Westport Library’s WestportREADS salute to the late chef Julia Child, Westport author Nina Sankovitch today talked about “Letters as Recipes for Life“ at the library.

Julia Child Memoir is WestportREADS 2014 Choice (12/2013): The Westport Library has selected “My Life in France” by the late famed chef Julia Child as its 2014 selection for WestportREADS, an annual program sponsored by the Library to strengthen the community through the shared experience of a book.

Warren Gerds/Critic at Large: Week ahead: Even Julia Child is in the mix (11/2013): The famed chef gets a nod in “Food and Fantasy” at St. Norbert College.