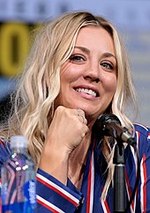 Kaley Christine Cuoco (/ˈkwoʊkoʊ/ KWOH-koh; born November 30, 1985) is an American actress and producer. After a series of supporting film and television roles in the late 1990s, she landed her breakthrough role as Bridget Hennessy on the ABC sitcom 8 Simple Rules (2002–2005). Thereafter, Cuoco voiced Brandy Harrington on Brandy & Mr. Whiskers (2004–2006) and appeared as Billie Jenkins on the final season of the television series Charmed (2005–2006). She later starred as Penny on the CBS sitcom The Big Bang Theory (2007–2019), and received a Satellite Award, a Critics' Choice Award, and two People's Choice Awards for the role. Since 2020, Cuoco has starred in and served as executive producer for the HBO Max comedic thriller The Flight Attendant, which received widespread critical acclaim. For this performance, she has received nominations at the Primetime Emmy Awards, the Golden Globe Awards, the Screen Actors Guild Awards, and the Critics' Choice Awards. More about Kaley Cuoco

Current items with a signature of Kaley Cuoco

These are the most current items with a signature of Kaley Cuoco that were listed on eBay and on other online stores - click here for more items.

Traded items with a signature of Kaley Cuoco

The most expensive item with a signature of Kaley Cuoco (Kaley Cuoco Cryptozoic Big Bang Theory Autograph Auto Season 1 A3) was sold in December 2021 for $2500.00 while the cheapest item (Kaley Cuoco Autographed signed A4 photo) found a new owner for $0.99 in February 2020. The month with the most items sold (6) was July 2020 with an average selling price of $24.53 for an autographed item of Kaley Cuoco. Sold items reached their highest average selling price in July 2014 with $440.00 and the month that saw the lowest prices with $1.99 was September 2013. In average, an autographed item from Kaley Cuoco is worth $26.85.

Most recently, these items with a signature of Kaley Cuoco were sold on eBay - click here for more items.