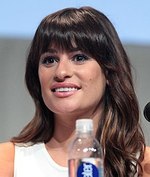 Lea Michele Sarfati (/ˈliːə mɪˈʃɛl/; born August 29, 1986) is an American actress, singer, songwriter, and author. She began her career as a child actress on Broadway, appearing in productions of Les Misérables (1995–1996), Ragtime (1997–1999), Fiddler on the Roof (2004–2005), and Spring Awakening (2006–2008). Michele came to prominence playing Rachel Berry on the Fox series Glee (2009–2015), for which she received an Emmy Award nomination, two Golden Globe nominations and won four People's Choice Awards, three Teen Choice Awards and a Satellite Award. Michele and the rest of the Glee cast earned a Screen Actors Guild Award for Outstanding Performance by an Ensemble in a Comedy Series from four nominations and three Grammy Award nominations for music recorded for the series, also spawning multiple hits on the Billboard charts. Michele subsequently starred as Hester Ulrich on the Fox series Scream Queens (2015–2016) and as Valentina Barella on the ABC sitcom The Mayor (2017). More about Lea Michele

Current items with a signature of Lea Michele

These are the most current items with a signature of Lea Michele that were listed on eBay and on other online stores - click here for more items.

Traded items with a signature of Lea Michele

The most expensive item with a signature of Lea Michele (Glee Cast SIGNED 11x17 Poster Lea Michele Cory Monteith COA) was sold in June 2022 for $505.75 while the cheapest item (Lea Michele Sexy Signed GLEE Photo) found a new owner for $0.99 in June 2015. The month with the most items sold (23) was October 2022 with an average selling price of $150.00 for an autographed item of Lea Michele. Sold items reached their highest average selling price in December 2009 with $330.00 and the month that saw the lowest prices with $4.99 was March 2017. In average, an autographed item from Lea Michele is worth $60.00.

Most recently, these items with a signature of Lea Michele were sold on eBay - click here for more items.