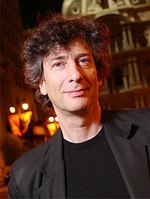 Neil Richard MacKinnon Gaiman (/ˈɡeɪmən/; born Neil Richard Gaiman, 10 November 1960) is an English author of short fiction, novels, comic books, graphic novels, nonfiction, audio theatre, and films. His works include the comic book series The Sandman and novels Stardust, American Gods, Coraline, and The Graveyard Book. He has won numerous awards, including the Hugo, Nebula, and Bram Stoker awards, as well as the Newbery and Carnegie medals. He is the first author to win both the Newbery and the Carnegie medals for the same work, The Graveyard Book (2008). In 2013, The Ocean at the End of the Lane was voted Book of the Year in the British National Book Awards. It was later adapted into a critically acclaimed stage play at the Royal National Theatre in London, England that The Independent called "...theater at its best". More about Neil Gaiman

Current items with a signature of Neil Gaiman

These are the most current items with a signature of Neil Gaiman that were listed on eBay and on other online stores - click here for more items.

Traded items with a signature of Neil Gaiman

Most recently, these items with a signature of Neil Gaiman were sold on eBay - click here for more items.

Taffy Brodesser-Akner Discusses ‘Fleishman Is in Trouble’ (11/18/22): The journalist talks about her debut novel, and Neil Gaiman discusses “Norse Mythology.”

‘The Sandman’ Is Coming to TV. Here’s Why That’s a Big Deal. (08/04/22): For decades, fans have hoped for an adaptation of the Neil Gaiman story, a seminal work in the world of comics and beyond. A series version arrives Friday on Netflix.