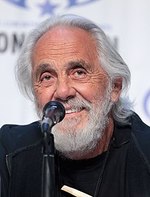 Thomas B. Kin Chong (born May 24, 1938) is a Canadian-American actor, comedian, musician, and activist. He is known for his marijuana-themed Cheech & Chong comedy albums and movies with Cheech Marin, as well as playing the character Leo on Fox's That '70s Show. He became a naturalized United States citizen in the late 1980s. More about Tommy Chong

Current items with a signature of Tommy Chong

These are the most current items with a signature of Tommy Chong that were listed on eBay and on other online stores - click here for more items.

Traded items with a signature of Tommy Chong

The most expensive item with a signature of Tommy Chong (TOMMY CHONG GLASS COLLECTIBLE **AUTOGRAPHED**) was sold in August 2016 for $800.00 while the cheapest item (W@W! Tommy Chong! Signed Autographed Photo {Fast S&H}) found a new owner for $0.01 in September 2012. The month with the most items sold (11) was May 2017 with an average selling price of $15.50 for an autographed item of Tommy Chong. Sold items reached their highest average selling price in February 2019 with $100.00 and the month that saw the lowest prices with $4.45 was September 2021. In average, an autographed item from Tommy Chong is worth $17.00.

Most recently, these items with a signature of Tommy Chong were sold on eBay - click here for more items.

Tommy Chong nixed from pot lobbying push as legal marijuana tries to grow up (04/09/15): When the National Cannabis Industry Association descends on Capitol Hill later this month, Tommy Chong, the actor who spent years smoking up on screen and pushing for America to legalize marijuana, won’t be there.

Tommy Chong’s solution for pot’s banking problem (04/07/15): Tommy Chong, the man whose name is already on marijuana deodorizing wipes, is putting his name on a few other things, including a loyalty and payments card and several strains of marijuana.

Reliable Source: The pot lobby nixes Tommy Chong to better appeal to ‘conservati (03/2015): Actor Tommy Chong's role to lobby for The National Cannabis Industry Association on the Hill has gone up in smoke, a news report says.

Tommy Chong Didn't Teach Me Shit About Rolling A Joint (02/2015): Tommy Chong's joint-rolling machine, the Chong Roller, produces a fine joint: cone-style, with a filter, and perfectly symmetrical. The end product is, indeed, quite a lovely thing. Read more...

Comedian Tommy Chong's Plan To Become Legal Pot's Sam Walton (12/2014): In the Wild West that is the emerging legal-marijuana sector, no dominant brand name has emerged as yet. Comedian and pot activist Tommy Chong is hoping to change that.

Tommy Chong's passion for fitness kept his dancing challenge in step (11/2014): Tommy Chong thinks pumping iron is far out, man. A lifter of heavy things from a young age, the 76-year-old comedian from Canada has put his entire fitness regimen on hold to lift and twirl a professional dancer on the current season of "Dancing With the Stars." Although Chong didn't have...