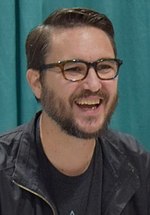 Richard William Wheaton III (born July 29, 1972) is an American actor, blogger, and writer. He portrayed Wesley Crusher on the television series Star Trek: The Next Generation, Gordie Lachance in the film Stand by Me, Joey Trotta in Toy Soldiers, and Bennett Hoenicker in Flubber. Wheaton has also appeared in recurring voice acting roles as Aqualad in Teen Titans, Cosmic Boy on the Legion of Super Heroes, and Mike Morningstar/Darkstar in the Ben 10 franchise's original continuity. He appeared regularly as a fictionalized version of himself on the sitcom The Big Bang Theory and in the roles of Fawkes on The Guild, Colin Mason on Leverage, and Dr. Isaac Parrish on Eureka. Wheaton was the host and co-creator of the YouTube board game show TableTop. He has narrated numerous audio books, including Ready Player One and Ready Player Two. More about Wil Wheaton

Current items with a signature of Wil Wheaton

These are the most current items with a signature of Wil Wheaton that were listed on eBay and on other online stores - click here for more items.

Traded items with a signature of Wil Wheaton

The most expensive item with a signature of Wil Wheaton (The Big Bang Theory Prop Screen Used Wil Wheaton Apt Stand By Me Signed Poster) was sold in May 2022 for $2475.00 while the cheapest item (Wil Wheaton as Dr. Isaac Parrish signed 8x10 photo from Eureka with WizAuth) found a new owner for $0.99 in May 2020. The month with the most items sold (3) was March 2021 with an average selling price of $59.95 for an autographed item of Wil Wheaton. Sold items reached their highest average selling price in June 2021 with $995.95 and the month that saw the lowest prices with $0.99 was March 2011. In average, an autographed item from Wil Wheaton is worth $39.95.

Most recently, these items with a signature of Wil Wheaton were sold on eBay - click here for more items.