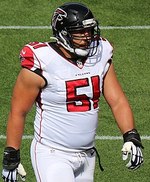 Javon Alexander Mack (born November 19, 1985) is an American football center for the San Francisco 49ers of the National Football League (NFL). He played college football for the University of California, and was drafted by the Cleveland Browns 21st overall in the 2009 NFL Draft. More about Alex Mack

Current items with a signature of Alex Mack

These are the most current items with a signature of Alex Mack that were listed on eBay and on other online stores - click here for more items.

Traded items with a signature of Alex Mack

The most expensive item with a signature of Alex Mack (ALEX MACK CLEVELAND BROWNS SIGNED JERSEY PRO BOWL EXACT PROOF) was sold in March 2016 for $125.00 while the cheapest item (2019 Panini Majestic Alex Mack Autograph Falcons/ 49ers Low#4/15 Future HOF) found a new owner for $0.99 in September 2021. The month with the most items sold (5) was October 2014 with an average selling price of $29.99 for an autographed item of Alex Mack. Sold items reached their highest average selling price in August 2014 with $125.00 and the month that saw the lowest prices with $1.00 was July 2011. In average, an autographed item from Alex Mack is worth $12.99.

Most recently, these items with a signature of Alex Mack were sold on eBay - click here for more items.

Alex Mack retires: Seven-time Pro Bowl center ends career after 13 seasons with (06/03/22): Mack is going out at the peak of his powers

Former Browns center Alex Mack is retiring from the NFL (06/02/22): Mack was a 1st-round pick in 2009 and was consistently one of the NFL's best centers

NFL rumors: Alex Mack takes pay cut, providing clue about 49ers future (06/2022): The 49ers have not said whether they expect center Alex Mack will return to the club for the 2022 season.

Alex Mack skips 49ers OTAs as status for 2022 NFL season remains unclear (05/2022): The 49ers opened organized team activities on Monday, and a source tells NBC Sports Bay Area that center Alex Mack was among those not in attendance for the voluntary work.

Mack unfazed as Falcons draft likely successor (05/2020): Heading into his 12th season, Falcons center Alex Mack said he's not worried about 2021 at this time and won't decide on his future until after this season. In the interim, he'll do all he can to help Matt Hennessy, his likely successor.