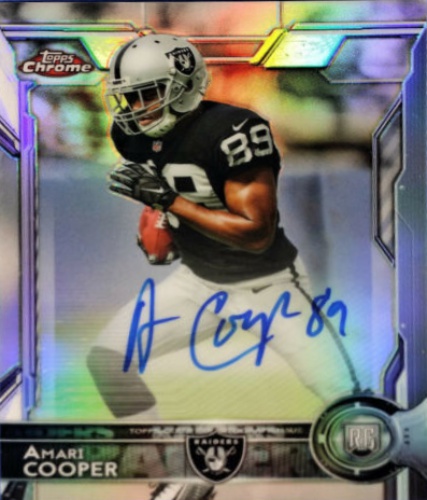 Amari Cooper (born June 17, 1994) is an American football wide receiver for the Cleveland Browns of the National Football League (NFL). He played college football at Alabama, where he was the Biletnikoff Award winner as the nation's top receiver and a unanimous All-American in 2014. Widely considered the top wide receiver prospect of the 2015 NFL Draft, Cooper was selected with the fourth overall pick by the Oakland Raiders. More about Amari Cooper

Current items with a signature of Amari Cooper

These are the most current items with a signature of Amari Cooper that were listed on eBay and on other online stores - click here for more items.

Traded items with a signature of Amari Cooper

If you're interested in Amari Cooper Rookie cards you might want to take a look at our sister site that specializes in Football Rookie Cards only.

Most recently, these items with a signature of Amari Cooper were sold on eBay - click here for more items.

Browns Injury Report: David Bell listed as questionable, Amari Cooper is good to (12/15/22): Only one player gets a gameday injury designation this week.

Browns announce 7 inactives as Amari Cooper is set to play vs. Bengals (12/11/22): The Browns have released their inactives, but the biggest news surrounds Amari Cooper.

Week 14 Injury Report: Amari Cooper only player with injury designation vs. Beng (12/2022): How healthy are the Browns going into their Week 14 matchup against the Bengals?

Quite the catch: WR Cooper has been everything Browns hoped (11/2022): CLEVELAND (AP) Amari Cooper has been everything the Cleveland Browns hoped, providing leadership and high-quality play from the moment he arrived via trade from Dallas. At least Cooper was able to laugh late Monday night after his first pass in the NFL was intercepted when Cleveland's attempt to t

Jerry Jones: Amari Cooper is a real good player, the issue was how much we were (09/2022): The trade that sent Amari Cooper from Dallas to Cleveland this offseason is working out for the Browns. But the man who made the trade, Cowboys owner and General Manager Jerry Jones, says it will work out in the long term for the Cowboys as well. Jones said on 105.3 The Fan that by trading [more]

Watch Amari Cooper burn Eagles corner with a double move (08/2022): Thursday we saw Ford make an Eagles defender look foolish, Friday Cooper does the same with a great route and Brissett's pass is perfect for a TD:

Kevin Stefanski impressed with Amari Cooper early in Browns camp, will run his p (07/2022): Cooper has made a strong impression with the Browns

Jerry Jones says CeeDee Lamb is an upgrade over Amari Cooper as a No. 1 receiver (05/2022): The Cowboys traded Amari Cooper to the Browns this offseason, leaving no question that CeeDee Lamb is the No. 1 receiver in Dallas. Cowboys owner and General Manager Jerry Jones says that’s an improvement. Jones told Clarence Hill of the Star-Telegram that Lamb will be an upgrade over Cooper as a tr

Amari Cooper: ‘I actually loved’ being a Cowboy, sees trade to unfamiliar Browns (04/2022): The veteran WR joins his third team in 8 seasons, calling the move "just business," but admits what he knew of the Browns came from a movie. | From @ToddBrock24f7

Jerry Jones on Amari Cooper trade: We made a decision that that allocation shoul (03/2022): The Cowboys traded a first-round draft choice to obtain receiver Amari Cooper from the Raiders in 2018. They signed Cooper to a five-year, $100 million deal in 2020. Earlier this month, the Cowboys traded Cooper to the Browns for a fifth-round choice and a swap of sixth-round choices. “We made a dec

CeeDee Lamb talks Cowboys offensive woes, potential Amari Cooper departure (02/2022): Lamb gives his thoughts on why the offense fluttered down the stretch and the possibility of losing the club's route-running wizard. | From @StarConscience

5 potential trade destinations for WR Amari Cooper (01/2022): Not that it's a guarantee, but where could Amari Cooper land if he is dealt by Dallas?

Cowboys' Amari Cooper admits he's upset by lack of targets, Dallas' offensive st (12/2021): Dallas is winning, but largely because of its defense

Cowboys woes: Amari Cooper's status still in question, another player added to C (11/2021): Nahshon Wright is the eighth Cowboys player or coach to land on the COVID list

What makes Cowboys' Amari Cooper one of the NFL's best route runners? (09/2021): Is it his quickness? The way he manipulates corners? Cooper has mastered the art of route running, incorporating his own style into each one.

Cowboys' Amari Cooper was told he will play in preseason vs. Texans: 'I'm lookin (08/2021): Another great sign for Dallas that their WR1 is completely healthy

Cowboys WR Cooper undergoes ankle surgery (01/2021): Sources told ESPN that Amari Cooper's ankle surgery was a clean-up that will not require a long rehab for the Cowboys receiver.

Agent's Take: Travis Kelce, Amari Cooper contracts among six flawed 2020 deals (10/2020): Some of these contracts aren't quite what they seem, while others never should have been done

Agent's Take: Inside the financials behind 2020 NFL free agency's biggest deals (04/2020): How the money breaks down, from a big QB market to huge deals for Amari Cooper, Byron Jones and more

Cowboys meet with Amari Cooper's representatives at combine and reportedly want (02/2020): The Cowboys are hoping to come to terms with Cooper sometime over the next few weeks

Amari Cooper says he won't rush contract talks with Cowboys, wants to stay in Da (01/2020): Cooper reaffirmed he wants to remain with the Cowboys

Predicting Amari Cooper’s new deal with the Dallas Cowboys (02/2019): How much is it going to cost the Cowboys to keep their new star wide receiver?

Amari Cooper’s Goal: Be The NFL’s Best WR  (01/2019): Over the last 12 months, Amari Cooper has a new team, a new offense and a new quarterback. He might be getting close to a new contract as well. But there is a personal goal that hasn’t changed: be the best in the NFL.

What should Giants do if wide receiver Kevin White or Amari Cooper is available (02/2015): They could go playmaker or top offensive lineman. Seems like a good choice to have.

Amari Cooper helps Alabama erase 12-point deficit to beat Auburn 55-44 in Iron B (11/2014): Alabama had already clinched a spot in the SEC championship game against No. 17 Missouri, and the top team in the College Football Playoff rankings scored 28 consecutive points heading into the final seconds.

A Star Reborn: The Ultimate Amari Cooper Hype Tape (10/2014): Amari Cooper has been opening eyes throughout his tenure at Alabama. From his breakout freshman year to his current junior campaign, the talented wideout has left his mark in Tuscaloosa.  What are your thoughts on the maturation of this explosive wide receiver? Watch the video and let us know!

Heisman Watch: Can Alabama’s Amari Cooper End Heisman Drought For Receivers? (09/2014): Every season is different when it comes to the Heisman Trophy, but history suggests it will be very tough for Alabama wide receiver Amari Cooper to have a legitimate shot at striking a pose in New York at the end of the season.

Amari Cooper accounts for more than half of team’s receiving yards (08/2014): ATLANTA | No one ever likes to admit they play favorites, but against West Virginia in the 33-23 win, Alabama quarterback Blake Sims had a favorite: wide receiver Amari Cooper.

Amari Cooper wants to put up bigger numbers this season (07/2014): HOOVER| Amari Cooper shared with the media on Thursday his plans for great performances, great records and great outcomes for the 2014 season at SEC Media Days.

A more vocal Amari Cooper says Lane Kiffin already making his mark on Alabama of (03/2014): Amari Cooper is a man of few words. At least that's the reputation that proceeds him. He's known more as a show don't tell kind of player. But either by necessity or by choice, the University of Alabama wide receiver will be more out front this season as a sort of spokesman for the offense

Amari Cooper gets his groove back (10/2013): Amari Cooper created some separation. Quarterback AJ McCarron threaded a ball in Cooper's hands for a touchdown, a perfectly timed, flawlessly executed pitch-and-catch that rekindled memories of a deadly connection last season.