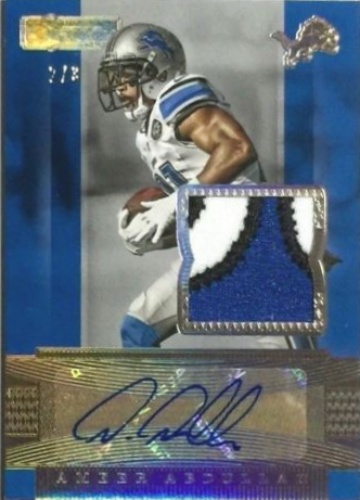 Ameer Abdullah (born June 13, 1993) is an American football running back for the Las Vegas Raiders of the National Football League (NFL). He was drafted by the Detroit Lions in the second round of the 2015 NFL Draft. He played college football at Nebraska. In 2013, Abdullah rushed for 1,690 yards, fourth most for a single season in University of Nebraska history. He decided not to enter the NFL Draft at the end of his junior year, but instead to return for his senior season. He was considered a contender for the 2014 Heisman Trophy. He is a native of Homewood, Alabama. More about Ameer Abdullah

Current items with a signature of Ameer Abdullah

These are the most current items with a signature of Ameer Abdullah that were listed on eBay and on other online stores - click here for more items.

Traded items with a signature of Ameer Abdullah

The most expensive item with a signature of Ameer Abdullah (AMEER ABDULLAH NEBRASKA CORNHUSKERS SIGNED RETRO FULL SIZE HELMET w/ COA) was sold in September 2017 for $399.99 while the cheapest item (2015 DONRUSS SIGNATURE SERIES AMEER ABDULLAH AUTO JUMBO JERSEY RC RPA BD936) found a new owner for $0.99 in December 2022. The month with the most items sold (99) was October 2022 with an average selling price of $11.00 for an autographed item of Ameer Abdullah. Sold items reached their highest average selling price in September 2016 with $149.98 and the month that saw the lowest prices with $1.40 was September 2020. In average, an autographed item from Ameer Abdullah is worth $19.99.

Most recently, these items with a signature of Ameer Abdullah were sold on eBay - click here for more items.

Davante Adams, Kolton Miller limited Wednesday; Derek Carr full (11/16/22): Raiders receiver Davante Adams (abdomen) was limited in Wednesday’s practice with an abdomen injury. Left tackle Kolton Miller also popped up on the practice report with shoulder and abdomen injuries. He was limited. Quarterback Derek Carr remained on the report with his back injury, but he was a fu

Raiders sign Ameer Abdullah (03/18/22): The Raiders have officially brought in another running back. Las Vegas announced on Friday that they’ve signed Ameer Abdullah. A second-round pick back in the 2015 draft, Abdullah appeared in 11 games for the Panthers in 2021. He recorded 136 yards on 44 carries along with 272 yards on 35 receptions