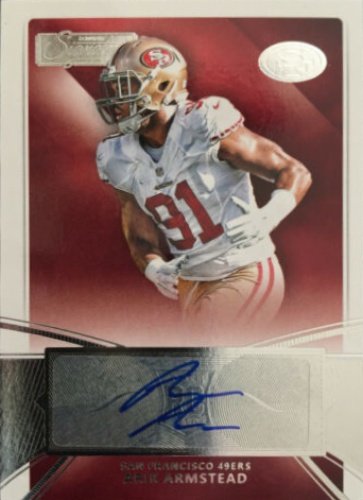 Arik Armstead (born November 15, 1993) is an American football defensive end for the San Francisco 49ers of the National Football League (NFL). He played college football at Oregon and was drafted by the 49ers in the first round of the 2015 NFL Draft. More about Arik Armstead

Current items with a signature of Arik Armstead

These are the most current items with a signature of Arik Armstead that were listed on eBay and on other online stores - click here for more items.

Traded items with a signature of Arik Armstead

The most expensive item with a signature of Arik Armstead (Arik Armstead Signed Autographed San Francisco 49ers Mini Helmet BECKETT COA) was sold in February 2021 for $159.99 while the cheapest item (2015 DONRUSS SIGNATURE SERIES ROOKIE SIGNATURE #417 ARIK ARMSTEAD - 49ERS) found a new owner for $0.35 in June 2019. The month with the most items sold (13) was January 2022 with an average selling price of $12.00 for an autographed item of Arik Armstead. Sold items reached their highest average selling price in October 2019 with $89.99 and the month that saw the lowest prices with $0.35 was June 2019. In average, an autographed item from Arik Armstead is worth $8.50.

Most recently, these items with a signature of Arik Armstead were sold on eBay - click here for more items.

Arik Armstead fires back at Giants' Kayvon Thibodeaux for trolling 49ers (01/30/23): Arik Armstead wasn't in the mood to be the target of any unnecessaryjabsafter the 49ers' 31-7 loss to the Philadelphia Eagles in the NFC Championship Game.

How 49ers' Arik Armstead embraces role as 'quarterback' of defensive line (01/28/23): Arik Armstead explained how his role with the 49ers has developed over the years and how he continues to embrace it.

Arik Armstead regrets missed safety on Dak Prescott (01/23/23): The Cowboys had one last chance last night against the 49ers, down seven points and 94 yards from a touchdown, with 45 seconds to play. The effort left much to be desired. It nearly left even less. On the first play, quarterback Dak Prescott received the shotgun snap at the one, rolled right, starte

Arik Armstead and Javon Kinlaw can underline importance in divisional round vs. (01/2023): The 49ers’ interior DL will be big (figuratively and literally) against the Cowboys today. Nicholas McGee (@nicholasmcgee24) gets you ready:

Deebo Samuel questionable, Arik Armstead doubtful for 49ers (11/2022): The 49ers only have two players with injury designations for Sunday’s game against the Saints, but they’re both key members of the team. Wide receiver Deebo Samuel is listed as questionable due to a hamstring injury and defensive lineman Arik Armstead is doubtful to play due to foot and ankle issues

Arik Armstead return to 49ers practice close after knee injury (08/2022): Arik Armstead, a stalwart on the 49ers defensive line, should be ready to return to practice this week.

Arik Armstead on Trey Lance: Expecting great things, but it isn’t all on his sho (06/2022): The Warriors had a championship parade in San Francisco this week and 49ers defensive lineman Arik Armstead was watching the festivities with his mind on his team’s future. Armstead said on The Jim Rome Show that it was “definitely inspiring” to see the celebration unfold and that he knows it would

Community work of Arik Armstead an 'inspiration' (12/2021): The 49ers' defensive tackle is committed to projects that include childhood education and social justice.

Arik Armstead explains why the 49ers will avoid the dreaded Super Bowl hangover (05/2020): The 49ers will try to become the fourth team to win the Super Bowl a year after losing the big game

Source: 49ers nearing top goal of Armstead deal (03/2020): Re-signing defensive lineman Arik Armstead was the 49ers' top priority this offseason, and they have nearly accomplished it, with the sides closing in on a five-year contract, a source told ESPN.

ProDucks Blog: Can anyone slow down the freight train that is Arik Armstead and (10/2019): No team has come remotely close yet…