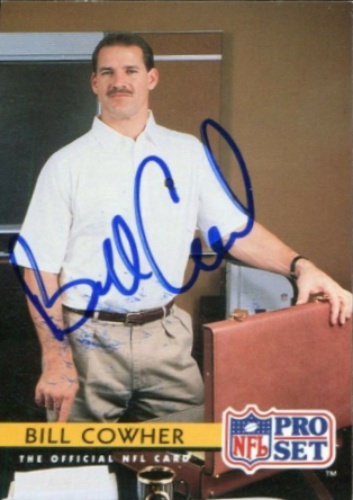 William Laird Cowher (born May 8, 1957) is a former American football linebacker, and current sports analyst who served as a head coach in the NFL for 15 seasons with the Pittsburgh Steelers. He began his coaching career as an assistant under Marty Schottenheimer for the Cleveland Browns and Kansas City Chiefs, serving as the latter's defensive coordinator from 1989 to 1991. Cowher was named head coach of the Steelers in 1992, whom he led until his retirement following the 2006 season. After retiring, he joined The NFL Today as a studio analyst. More about Bill Cowher

Current items with a signature of Bill Cowher

These are the most current items with a signature of Bill Cowher that were listed on eBay and on other online stores - click here for more items.

Traded items with a signature of Bill Cowher

The most expensive item with a signature of Bill Cowher (BILL COWHER SIGNED STEELERS FS SPEED AUTHENTIC HELMET JSA #WPP857851) was sold in August 2020 for $599.99 while the cheapest item (Former Steeler HQ BILL COWHER Signed Photo) found a new owner for $0.99 in April 2017. The month with the most items sold (29) was December 2008 with an average selling price of $29.99 for an autographed item of Bill Cowher. Sold items reached their highest average selling price in August 2020 with $439.99 and the month that saw the lowest prices with $0.99 was May 2015. In average, an autographed item from Bill Cowher is worth $29.99.

Most recently, these items with a signature of Bill Cowher were sold on eBay - click here for more items.

Former Steelers HC Bill Cowher says you can’t have a 3-man QB competition (06/15/22): Who will end up the Steelers starting quarterback?

Bill Cowher on Mike Tomlin's future with Steelers: 'He'll be first one to know w (07/14/21): Tomlin succeeded Cowher as Pittsburgh's coach in 2007

Bill Cowher shares unforgettable story on fatherhood in his new book, 'Heart and (06/20/21): A loss was never celebrated more in the Cowher household

Bill Cowher turns 64: Five things you might not know about the Steelers' Hall of (05/2021): Cowher left an indelible mark during his time on the sidelines

2021 Pro Football Hall of Fame: Bill Cowher names Steelers' Art Rooney as his pr (03/2021): The legendary Steelers coach has made his decision

Would Bill Cowher be interested in New York Jets' coaching job? Cowher says ... (12/2020): The former Steelers boss last coached in the NFL in 2006, but he makes sense for New York and wouldn't be the first to come back after a long layoff.

Ex-Steelers coach Cowher positive for virus (07/2020): Former Steelers coach Bill Cowher says he and his wife had the coronavirus.

Pro Football Hall of Fame Class of 2020 coach Bill Cowher shares support for ind (06/2020): The longtime Steelers coach, like the rest of his class, will have to wait another year to receive his gold jacket

Bill Cowher thinks that the Steelers 'would be a great fit' for Jameis Winston (04/2020): The soon-to-be Hall of Fame coach thinks Winston should sign with his former team

Cowboys, Steelers to square off in 2020 NFL Hall of Fame Game amid Jimmy Johnson (03/2020): Two of the most historic franchises will lock horns this preseason

How was Tom Flores leapfrogged by Bill Cowher, Jimmy Johnson for Hall of Fame? (02/2020): Tom Flores thought this was his Hall of Fame year, but it ended in a familiar way. How was the Raiders icon passed over yet again?

Hall of Fame coach Bill Cowher 'sees a lot of himself' in Titans' Mike Vrabel (01/2020): Cowher breaks down how the Titans under Vrabel compare to his Steelers teams of the past

Former Steelers coach Bill Cowher says 2019 has been Mike Tomlin's best coaching (12/2019): Cowher's successor has the Steelers on the cusp of another postseason appearance

Bill Cowher: From A Steeltown Title To Embracing Flexbility Beyond Coaching (03/2015): Just a few years after leading the Steelers to a fifth Super Bowl win, Bill Cowher walked away from coaching. And he couldn't be happier about his decision.

Former coach Bill Cowher on Sunday's key NFL matchups (01/2015): Sunday is do-or-die for the Colts, Patriots, Packers and Seahawks. CBS Sports NFL analyst Bill Cowher, who also led the Pittsburgh Steelers to a Super Bowl victory as head coach, joins "CBS This Morning" to give a preview of the weekend's games.

Boomer & Carton: Bill Cowher Knows A ‘Window Thrower’ When He Sees One (12/2014): Sunday's edition of 'The NFL Today' on CBS featured a segment with Boomer and his buddy, Bill Cowher, talking about the greatness of Aaron Rodgers.

Bill Cowher: Jets Are ‘Not A Team To Be Taken Lightly’ (11/2014): “NFL on CBS” analyst and former Steelers head coach Bill Cowher joined “The Fan Morning Show” Tuesday to talk about the state of the black and gold.

Bill Cowher: Everybody Tried To Steal Signals, Not Just Belichick (01/2014): Former Steelers head coach and The NFL Today on CBS analyst Bill Cowher joined The Fan Morning Show on Wednesday to talk about the NFL playoffs, the coaching searches being conducted right now, and his career.

Bill Cowher: The Next Coach for the Redskins? (12/2013): Many have speculated as to who will become the next head coach for the Washington Redskins. So, let the speculations begin! According to ESPN 980′s Chris Russell, there is one main candidate, and that candidate is Bill Cowher, who is …

Bill Cowher won’t coach ‘any time in the near future’ (10/2013): Bill Cowher is advancing his second career on Sunday as he continues to put his first career on hold. Cowher has taken a “never-say-never” approach to a potential return to...

Ohio judge outraged over Bill Cowher ad for Time Warner (09/2013): Welcome to your discussion forum: Verified accounts are now required for immediate posting. Please verify your e-mail address in Disqus, or sign in with your social networking account.

Big Ben to benefit from Todd Haley, Bill Cowher says (05/2013): Former Pittsburgh Steelers coach Bill Cowher believes Todd Haley's offense might be one of the best things to happen to Ben Roethlisberger. Is the quarterback poised to bounce back?

Former Steelers coach Bill Cowher on mission to fight melanoma (04/2013): Giants are one of five NFL teams joining Cowher and the Melanoma Exposed campaign to combat the fatal skin cancer

Super Bowl 2013 could come down to the ability to make in-game adjustments, says (02/2013): Baltimore Ravens and San Francisco 49ers have made adjustments all season

Bill Cowher: 8-8 won't trigger Steelers panic (01/2013): NEW ORLEANS -- Bill Cowher knows all about what it's like to go 8-8 as the Steelers did last season. Worse, he knows what 7-9 and 6-10 feel like, and the panic that can go with records like those no matter how successful his teams were previously.

Eagles coach Andy Reid follows path similar to Bill Cowher's (10/2012): Cowher was a successful regular season coach, but was criticized for not being able to win in the postseason. Reid has a similar record.

Super Bowl Coaches Jon Gruden, Bill Cowher and Jeff Fisher Are Being Linked To S (12/2011): Cowher, Fisher and Gruden are popping up in various job openings, but the history of Super Bowl coaches rebounding elsewhere is not pretty.

Bill Cowher Not Coaching Next Season (10/2011): The Miami Dolphins descent to the nadir of professional football isn’t complete yet. But if the Dolphins were hoping that former Pittsburgh Steelers head coach Bill Cowher would rescue the franchise; they may be out of luck.

Bill Cowher not ready to coach again (01/2011): Former Steelers coach Bill Cowher said he is not ready to start coaching in the NFL again yet during an interview with Sirius NFL Radio. Cowher's comments, found on Pro Football Talk , go against previous comments from early December when he said he would be open to listening to opportunities.

Bill Cowher: 10 Reasons He Should Stay Retired For One More Year (12/2010): According to reports, former Steelers head coach Bill Cowher is interested in returning to coach in the NFL. The Super Bowl winning coach recently expressed interest in the possibly soon-to-be vacant coaching positions in Houston, Miami and New York.