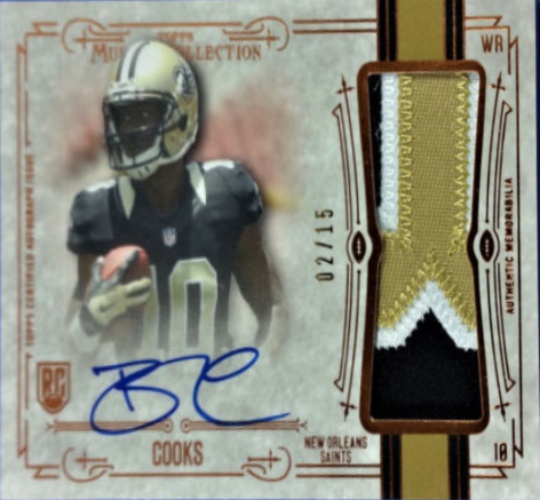 Brandin Tawan Cooks (born September 25, 1993) is an American football wide receiver for the Houston Texans of the National Football League (NFL). He played college football at Oregon State, where he received consensus All-American honors, and was selected by the New Orleans Saints in the first round of the 2014 NFL Draft. After three seasons with New Orleans, Cooks played one season for the New England Patriots and two seasons for the Los Angeles Rams before joining the Texans in 2020. More about Brandin Cooks

Current items with a signature of Brandin Cooks

These are the most current items with a signature of Brandin Cooks that were listed on eBay and on other online stores - click here for more items.

Traded items with a signature of Brandin Cooks

If you're interested in Brandin Cooks Rookie cards you might want to take a look at our sister site that specializes in Football Rookie Cards only.

The most expensive item with a signature of Brandin Cooks (Brandin Cooks New Orleans Saints Signed Custom Full Size Helmet JSA) was sold in March 2017 for $300.00 while the cheapest item (2021 Panini Phoenix Brandin Cooks Hot Routes Lazer Autograph /75 Texans) found a new owner for $0.99 in September 2022. The month with the most items sold (22) was September 2021 with an average selling price of $12.24 for an autographed item of Brandin Cooks. Sold items reached their highest average selling price in December 2016 with $125.50 and the month that saw the lowest prices with $2.00 was February 2022. In average, an autographed item from Brandin Cooks is worth $18.99.

Most recently, these items with a signature of Brandin Cooks were sold on eBay - click here for more items.

Brandin Cooks trade request: Texans receiver not interested in being part of a r (01/10/23): Cooks has been trying to get out of Houston for some time now

Houston Texans dynamic duo of Brandin Cooks and Davis Mills 'striving' for perfe (09/2022): In Mills' rookie year, the QB was able to help the veteran wideout reach a career high in receptions.

No Pro Bowl nod? No problem for Texans WR Brandin Cooks (08/2022): Brandin Cooks has zero Pro Bowl selections to his name, but he does have numbers -- and those don't lie.

Texans’ Brandin Cooks lands in top-25 among red zone receivers in 2021 (07/2022): Houston Texans receiver Brandin Cooks made Pro Football Focus' list of wideouts who were effective in the red zone in 2021.

Texans’ Triplets ranked No. 29 in latest CBS Sports list (05/2022): The Houston Texans' QB-RB-WR trio of Davis Mills, Marlon Mack, and Brandin Cooks was ranked as No. 29 overall according to CBS Sports.

Lovie Smith: Brandin Cooks wanted to be here (04/2022): Amid plenty of chatter regarding the possibility that Texans receiver Brandin Cooks would be traded for the fourth time in his career, Cooks signed a two-year extension to stay in Houston, through 2024. On Monday, at the start of the team’s offseason program, coach Lovie Smith addressed Cooks’s deci

Texans receiver Brandin Cooks wants to stay, Deshaun Watson could use him (01/2021): While the Texans need to cut salaries to get under the 2021 cap, if they cut Cooks, Watson will likely be depending on young talent.

Brandin Cooks shows in loss why Texans should find a way to keep him (12/2020): Cooks, closing in on another 1,000-yard season, could provide Deshaun Watson with the stability he needs at the wide receiver position.

Texans vs. Chiefs: Brandin Cooks active for Thursday Night Football despite quad (09/2020): Houston's new wide receiver had been limited in practice this week

Better, worse or the same? A look at the Rams' changes on offense (07/2020): A stacked tight ends room could play an increased role on the Rams' offense with the departure of wide receiver Brandin Cooks.

Brandin Cooks says Texans stacked with special receivers: 'Unselfishness will do (05/2020): Can the other wideouts step up in Hopkins' absence?

Rams' Brandin Cooks rattles fans with cryptic tweets; Cooper Kupp jumps in to cl (03/2020): Quarantine is making us all a little crazy

Brandin Cooks says Jared Goff is 'absolutely' the guy to lead the Rams despite d (02/2020): Cooks blames Goff's supporting cast for his struggles in 2019

Brandin Cooks is off the injury report (11/2019): Four weeks after suffering his fourth concussion since Super Bowl LII, receiver Brandin Cooks will return to action. Cooks, who sustained his latest head injury on October 27 in London during a win over the Bengals, has exited the final injury report for the week. He'll play on Monday night against

Rams' Cooks to see specialist for concussions (10/2019): Rams wide receiver Brandin Cooks is seeing a specialist after he suffered his second concussion this month in Sunday's game against the Bengals.