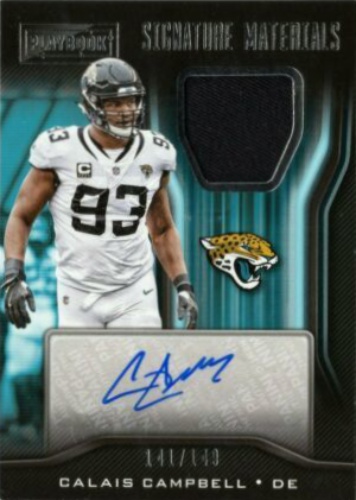 Calais Malik Campbell (born September 1, 1986) is an American football defensive tackle for the Baltimore Ravens of the National Football League (NFL). He played college football at the University of Miami and was drafted by the Arizona Cardinals in the second round of the 2008 NFL Draft. More about Calais Campbell

Current items with a signature of Calais Campbell

These are the most current items with a signature of Calais Campbell that were listed on eBay and on other online stores - click here for more items.

Traded items with a signature of Calais Campbell

If you're interested in Calais Campbell Rookie cards you might want to take a look at our sister site that specializes in Football Rookie Cards only.

Most recently, these items with a signature of Calais Campbell were sold on eBay - click here for more items.

Calais Campbell on processing Hamlin injury trauma, Bengals and sack dances I Th (01/06/23): Ravens DE Calais Campbell joins The Rush to chat about processing the trauma of watching Bills safety Damar Hamlin suffer cardiac arrest during an NFL game, how Baltimore is game-planning for the Bengals in Week 18 and possibly the first weekend of the NFL Playoffs, how the chance at 100 regular sea

Lamar Jackson officially didn’t practice, Marcus Peters and Calais Campbell also (12/28/22): Ravens quarterback Lamar Jackson’s status for Sunday’s game against the Steelers is firmly in question after the first day of the practice week. After reporters noted Jackson was not on the field for Wednesday’s session, the Ravens noted on their injury report that the quarterback did not participat

Calais Campbell: I’m preparing like this is my last year (08/2022): Calais Campbell is about to turn 36 years old. This is his 15th season. The defensive lineman doesn’t know how much more he has in him. “I’m in a place right now where I’m just taking it this year. I know I’ve got this year in me,” Campbell told NFL Media on Friday. “I don’t [more]

Calais Campbell: The Ravens are on the cusp of something great (06/2022): Defensive tackle Calais Campbell elected to re-sign with the Ravens this offseason on a two-year deal, which may or may not take him to the end of his playing career. Campbell, who turns 36 in September, has spent the last two seasons of his storied career with Baltimore, playing 27 games for the fr

Calais Campbell “definitely not retiring” (02/2022): Veteran defensive lineman Calais Campbell wrapped up his 14th NFL season last month and it won’t be the final one of his career. Campbell was part of Sky Sports’ broadcast of Super Bowl LVI on Sunday night and said after the game that watching others celebrate a championship confirmed that he still

Calais Campbell will be watching the scoreboard during Sunday’s game, hoping Col (01/2022): Some football players say they never pay attention to anything other than the game they’re playing in. Ravens defensive lineman Calais Campbell is not one of those players. To make the playoffs, the Ravens need to beat the Steelers on Sunday and hope the Colts, Dolphins and Chargers all lose. The Co

Calais Campbell donates $30K to help change Denver school from Rebels to Ravens (07/2021): "I understood what it was, and I didn't like it then," Campbell says of his alma mater. "But I didn't have any power ... now it feels good to be part of the change."

Saints' Cam Jordan believes he'll still be great in his 30s as Brandon Graham, C (06/2021): Jordan has played 10 seasons in the NFL and is entering the next decade of his career

Ravens' Campbell ruled out for 1st time since '14 (11/2020): Calais Campbell, who had started 98 straight games heading into Sunday, was ruled out vs. the Patriots with a calf injury.

Inside Ravens' Calais Campbell trade: Here's how a player Baltimore had recently (03/2020): If Calais Campbell lifts the Ravens to new heights, they might want to give Tony Jefferson a playoff share