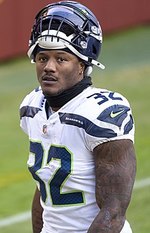 Christopher Dewayne Carson (born September 16, 1994) is an American football running back for the Seattle Seahawks of the National Football League (NFL). He played college football at Butler Community College before transferring to Oklahoma State in 2016. More about Chris Carson

Current items with a signature of Chris Carson

These are the most current items with a signature of Chris Carson that were listed on eBay and on other online stores - click here for more items.

Traded items with a signature of Chris Carson

The most expensive item with a signature of Chris Carson (Seattle Seahawks Chris Carson Autographed Game Issued Jersey) was sold in August 2021 for $749.99 while the cheapest item (2022 SCORE CHRIS CARSON GOLD ZONE AUTOGRAPH 08/50) found a new owner for $0.99 in December 2022. The month with the most items sold (11) was September 2019 with an average selling price of $2.99 for an autographed item of Chris Carson. Sold items reached their highest average selling price in December 2019 with $74.99 and the month that saw the lowest prices with $2.65 was November 2022. In average, an autographed item from Chris Carson is worth $12.00.

Most recently, these items with a signature of Chris Carson were sold on eBay - click here for more items.

Seahawks' Chris Carson retiring from NFL after five seasons due to neck injury, (07/26/22): Carson missed all but four games in 2021

Chris Carson gets highest Madden 23 rating among Seahawks RBs (07/20/22): In an interesting twist, it's Chris Carson who earned the highest rating this year among Seattle running backs.

Seahawks without Carson (neck) for Rams tilt (10/2021): Seahawks running back Chris Carson is inactive for Thursday night's home game against the Rams due to a neck injury.

Chris Carson gets Seahawks running game off to strong start with 30-yard touchdo (09/2021): Carson streaked to the end zone as the Seahawks' offense has established the running game early.

Week 14 NFL Power Rankings: 1-32 poll, plus the players and coaches with the mos (12/2020): Matt Nagy would like to stick as the Bears' coach, Drew Lock wants to be Denver's franchise QB and Chris Carson is looking for that big payday.

Seahawks' Carson back after 4-game absence (11/2020): The Seahawks will get a much-needed boost to their running attack as Chris Carson, who has missed four games with a sprained foot, will return against the Eagles on Monday.

Seahawks fear Carson's injury is season-ending (12/2019): The Seahawks lost to Arizona and also lost RB Chris Carson, who might have a season-ending hip injury. It was one of many injuries the team is facing.