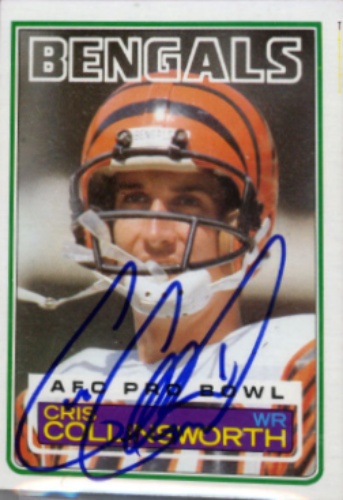 Anthony Cris Collinsworth (born January 27, 1959) is an American sports broadcaster and former professional American football player. Collinsworth was a wide receiver in the National Football League (NFL) for eight seasons (1981-1988), all with the Cincinnati Bengals. He played college football at the University of Florida, where he was recognized as an All-American. He is currently a television sportscaster for NBC, Showtime, and the NFL Network, and winner of 16 Sports Emmy Awards. He is also the majority owner of Pro Football Focus. More about Cris Collinsworth

Current items with a signature of Cris Collinsworth

These are the most current items with a signature of Cris Collinsworth that were listed on eBay and on other online stores - click here for more items.

Traded items with a signature of Cris Collinsworth

If you're interested in Cris Collinsworth Rookie cards you might want to take a look at our sister site that specializes in Football Rookie Cards only.

Most recently, these items with a signature of Cris Collinsworth were sold on eBay - click here for more items.

Cris Collinsworth said baiting Steelers into penalties part of the gameplan (01/02/23): The Ravens got Cam Heyward to make a costly mistake.

Tom Brady could play next year, work for Fox, or take a year off (09/12/22): NBC’s Cris Collinsworth made an interesting disclosure during garbage time of Tampa Bay’s Week One win in Dallas. While he and Mike Tirico were discussing their pregame production meeting with Buccaneers quarterback Tom Brady, Collinsworth said that, in 2023, Brady could play, start his job at Fox,

Lovie Smith on trading Deshaun Watson: “Sometimes divorce is good” (05/2022): The Texans traded away one of the most talented quarterbacks in the NFL this offseason, something teams rarely do. But in the unique circumstances facing Houston and Deshaun Watson, new Texans coach Lovie Smith says it was unquestionably the right move. Smith told Cris Collinsworth that it was past

Who are the announcers for Super Bowl 56 in Los Angeles? (02/2022): The NBC Sports annoucing team of Al Michaels, Cris Collinsworth and Michele Tafoya will be calling their fourth Super Bowl together on Feb. 13.

Why Cris Collinsworth believes 49ers will be better at end of season (11/2019): "They're growing into this offense as well, and they are healthier than the 49ers are at this point in the season, so it's going to be a great matchup."

Cris Collinsworth: Richard Sherman is Still "Bitter" Jim Harbaugh Didn't Endorse (12/2014): If true, Sherman has a right to carry a chip on his shoulder.

Cris Collinsworth proud son Austin has given 'body, soul' to Notre Dame (11/2014): SOUTH BEND, Ind. — As a three-time Pro Bowl receiver for the Bengals who played in two Super Bowls and as an analyst working on NBC's "Sunday Night Football," Cris Collinsworth has seen hundreds of exciting and important plays in his life.

NBC’s Cris Collinsworth: Panthers defense already dynamic, but the offense ... (09/2014): The best NFL analyst around is Cris Collinsworth, who will call the Carolina-Pittsburgh game for NBC on Sunday night. He spoke with Observer columnist Scott Fowler about the game.

NBC analyst Cris Collinsworth picks Chip Kelly, Eagles to go to Super Bowl (08/2014): Collinsworth is the first national analyst to mention "Super Bowl" when talking about how far this Eagles team could go.

Cris Collinsworth Says ‘League of Denial’ Won't Stop His Kids From Playing Footb (07/2014): Days after a judge approved a settlement in which the National Football League will pay out hundreds of millions of dollars to players with concussion-related health claims, NBC analyst and former NFL player Cris Collinsworth said he doesn't hesitate to let his two sons play the game.