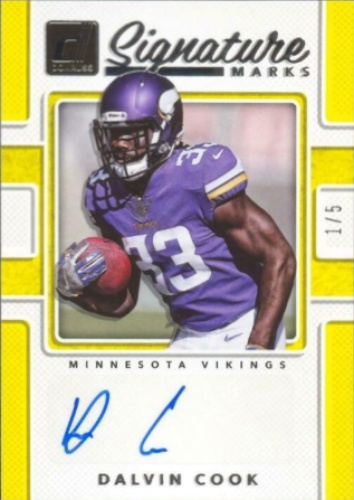 Dalvin James Cook (born August 10, 1995) is an American football running back for the Minnesota Vikings of the National Football League (NFL). He played college football at Florida State, where he finished his career as the school's all-time leading rusher. Cook was drafted by the Vikings in the second round of the 2017 NFL Draft. More about Dalvin Cook

Current items with a signature of Dalvin Cook

These are the most current items with a signature of Dalvin Cook that were listed on eBay and on other online stores - click here for more items.

Traded items with a signature of Dalvin Cook

If you're interested in Dalvin Cook Rookie cards you might want to take a look at our sister site that specializes in Football Rookie Cards only.

Most recently, these items with a signature of Dalvin Cook were sold on eBay - click here for more items.

2023 NFL Mock Draft: Colts reset at QB with Will Levis, Vikings add stud RB to p (12/28/22): The Colts have to address the quarterback position in Round 1 in April

Will Dalvin Cook run wild vs. the Giants in week 16? (12/21/22): Yahoo Sports’ Scott Pianowski explains why the Vikings RB should have a monster performance against the struggling Giants defense in week 16.

Cowboys have a full-blown run-defense problem, and their road to fixing it doesn (11/18/22): Sunday's matchup against the Vikings' Dalvin Cook is just the start of talented running backs Dallas will face going forward

James, Dalvin Cook have been ‘talking trash’ ahead of Bills-Vikings (11/12/22): Family affair on Sunday:

Cook, Vikings seek consistency after breakthrough TD (10/2022): MINNEAPOLIS (AP) Dalvin Cook took the handoff to the left, burst through a big hole between the center and the guard, then made a slick cutback to evade an arm tackle and veer right. Cook raced untouched the rest of the way for a 53-yard touchdown to help Minnesota finish off Miami on Oct. 16 befo

Vikings OK RB Cook for London game vs. Saints (09/2022): Dalvin Cook suffered a subluxation of his left shoulder but is expected to play this week after practicing with the team Thursday and in London on Friday.

Vikings activate Dalvin Cook off COVID-19 list (12/2021): The Vikings will have Dalvin Cook for the entire practice week as they get ready to face the Packers on Sunday. Cook has been activated off the reserve/COVID-19 list, Minnesota announced on Wednesday. Cook, who is reportedly unvaccinated, missed last week’s game against the Rams after testing positi

Behind the tears: Inside Dalvin Cook's emotional season after the death of his f (10/2021): Cook lost his hero and biggest fan when his father, James, died in December. Now the Vikings star finds inspiration remembering what his father taught him.

Even at training camp, Dalvin Cook gets to celebrate his college graduation (07/2021): The Vikings Pro Bowler and Florida State record holder is now a college graduate.

Keeping Vikings' Dalvin Cook fresh in 2021 starts in offseason (06/2021): It's early, but the Vikings are being mindful of Dalvin Cook's workload to avoid a dropoff following a heavy-usage 2020 season.

Vikings' Dalvin Cook helped off ground after fumble in Week 12 matchup vs. Panth (11/2020): Cook headed to the blue medical tent after the fumble

Vikings RB Cook (groin) ruled out vs. Falcons (10/2020): The Minnesota Vikings have ruled out running back Dalvin Cook for Sunday's game against the Atlanta Falcons with a groin injury.

Vikings' late-game collapse spoils big day for Justin Jefferson, offense (09/2020): Despite huge games from the rookie receiver and running back Dalvin Cook, Minnesota is 0-3 for the first time since 2013.

Sources: Cook, Vikes at impasse on contract talks (08/2020): The Vikings and top running back Dalvin Cook have reached an impasse in contract negotiations, sources have confirmed to ESPN. The sides had been discussing a multiyear deal until this past weekend. NFL Network first reported the impasse.

Dalvin Cook reportedly wanted to be NFL's highest-paid running back, but has now (06/2020): The Vikings running back had a jaw-dropping asking price

Vikings GM Rick Spielman suggests Dalvin Cook extension could get done this offs (04/2020): Cook had his best season yet in 2019 and is eligible for an extension

Vikings reportedly will likely discuss extension with Dalvin Cook this offseason (01/2020): Cook is heading into final year of rookie deal with Vikings

Vikings' playoff priority: Get Dalvin Cook back healthy (12/2019): The Vikings' loss to the Packers proves how valuable Cook is to the offense and their chances of success in the playoffs.

He’s cooking: Vikings RB’s recipe is speed, strength, vision (11/2019): Tackling Dalvin Cook has been a challenge this season. The Minnesota Vikings running back has vaulted to the top of the league’s rushing list while leaving behind a trail of defenders who have either bounced off his 5-foot-10, 210-pound frame or simply been left in his wake. How has Cook has made

Vikings' Dalvin Cook running into the MVP conversation (10/2019): Cook is putting together a breakout third season as a big-play threat in the running and passing games for the 6-2 Vikings.