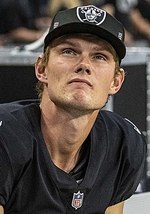 Daniel Vilhelm Carlson (born January 23, 1995) is an American football placekicker for the Las Vegas Raiders of the National Football League (NFL). He played college football at Auburn, where he became the SEC's all-time leading scorer, and was selected by the Minnesota Vikings in the fifth round of the 2018 NFL Draft. Released by Minnesota during his rookie season, he joined the Raiders and twice led the league in scoring. More about Daniel Carlson

Current items with a signature of Daniel Carlson

These are the most current items with a signature of Daniel Carlson that were listed on eBay and on other online stores - click here for more items.

Traded items with a signature of Daniel Carlson

The most expensive item with a signature of Daniel Carlson (Daniel Carlson Signed Autographed Oakland Raiders Mini Helmet Beckett BAS COA) was sold in October 2020 for $109.99 while the cheapest item (2018 CONTENDERS DANIEL CARLSON RC AUTOGRAPH #217 MINNESOTA VIKINGS) found a new owner for $1.35 in September 2020. The month with the most items sold (4) was December 2022 with an average selling price of $8.99 for an autographed item of Daniel Carlson. Sold items reached their highest average selling price in October 2020 with $109.99 and the month that saw the lowest prices with $3.63 was May 2022. In average, an autographed item from Daniel Carlson is worth $11.61.

Most recently, these items with a signature of Daniel Carlson were sold on eBay - click here for more items.

Chargers grab 13-10 lead before halftime (12/04/22): The Chargers gave up an early 10-point lead in Las Vegas, but they were able to move back in front of the Raiders before the first half came to an end. After a 55-yard field goal by Daniel Carlson tied the game, the Chargers were able to drive 59 yards over 10 plays to set [more]

Monday Night Football: Controversial roughing penalty aids Raiders, who lead Chi (10/11/22): Another game, another controversial roughing the passer penalty. The Raiders lead the Chiefs 20-10 at halftime of Monday Night Football, with a field goal by each team in the final 17 seconds. Las Vegas extended its lead to 20-7 on a 50-yard field goal by Daniel Carlson with 17 seconds remaining in

Steelers fans thank Daniel Carlson for winning field goal with charity donations (01/12/22): The Pittsburgh Steelers were teetering on the precipice of missing the playoffs due to an impending tie in the final regular season game of the 2021-22 season. If Sunday night’s game between the Los Angeles Chargers and Las Vegas Raiders ended deadlocked, both of those teams would make the playoffs

Fantasy Football Rankings: Week 16 kickers (12/2021): Will Daniel Carlson continue to be a top-three fantasy football kicker? Check out where he lands in our rankings.