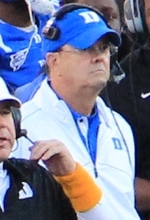 David Nelson Cutcliffe (born September 16, 1954) is the Special Assistant to the Commissioner for Football Relations at the Southeastern Conference and former college football coach, most recently head coach of the Duke University Blue Devils. Under Cutcliffe, in 2012 the Blue Devils ended an 18-year bowl drought and also brought the Victory Bell back to Duke after beating arch-rival University of North Carolina. The following season, Cutcliffe led the team to a second straight bowl appearance, another win over North Carolina, an Atlantic Coast Conference Coastal Division championship and the first 10-win season in school history. He also earned multiple college football coach of the year awards from the Walter Camp Football Foundation, the Maxwell Football Club, and the Bobby Dodd Foundation. More about David Cutcliffe

Current items with a signature of David Cutcliffe

These are the most current items with a signature of David Cutcliffe that were listed on eBay and on other online stores - click here for more items.

Traded items with a signature of David Cutcliffe

The most expensive item with a signature of David Cutcliffe ('12 Duke Blue Devils team signed helmet David Cutcliffe Sean Renfree Jela Duncan) was sold in December 2012 for $250.00 while the cheapest item (DAVID CUTCLIFFE SIGNED 8X10 PHOTO DUKE BLUE DEVILS COA) found a new owner for $0.50 in June 2009. The month with the most items sold (6) was December 2013 with an average selling price of $27.50 for an autographed item of David Cutcliffe. Sold items reached their highest average selling price in October 2019 with $189.95 and the month that saw the lowest prices with $0.50 was June 2009. In average, an autographed item from David Cutcliffe is worth $11.74.

Most recently, these items with a signature of David Cutcliffe were sold on eBay - click here for more items.

Across the Beat: Getting to know Miami (10/20/22): Miami, it seems, was not the ready-made powerhouse some people (*looks in mirror*) thought it to be when Mario Cristobal left Oregon to come home. The Hurricanes are 3-3 and while losing at Texas A&M and to UNC are hardly catastrophic losses, the middle game in that three-game slide – a 45-31 l

SEC hires former Ole Miss, Duke coach David Cutcliffe as special assistant to co (03/24/22): Cutcliffe will be a liaison between the conference's head coaches and its administrators

Elko aims to get Duke back to recent run of football success (12/13/21): DURHAM, N.C. (AP) New Duke coach Mike Elko is focused on the recent run of football success that he believes indicates Duke can win again, along with the school committing more financial investments for the program. ''We're going to win with this group as fast as we possibly can,'' Elko said Monda

Duke hires Mike Elko as coach: Texas A&M DC back in ACC after stops at Wake Fore (12/2021): Elko, who led Texas A&M to the nation's No. 3 scoring defense in 2021, will replace David Cutcliffe

Duke's Cutcliffe favors only conference games (07/2020): Duke football coach David Cutcliffe said he remains "very optimistic" there will be college football this season, but he doubts it will look much like a normal season due to the ongoing coronavirus pandemic.

Duke, Syracuse meet looking to end losing streaks (11/2019): Duke needs a few more wins to extend its postseason streak. Syracuse is looking for its first ACC win. ''We're all in a little bit of the same boat - there's a little bit of a fine line,'' coach David Cutcliffe said.

The Next Cutcliffe Quarterback: Daniel Jones (02/2019): Hogs Haven takes a look at 2019 NFL Draft prospects that could contribute to the Redskins