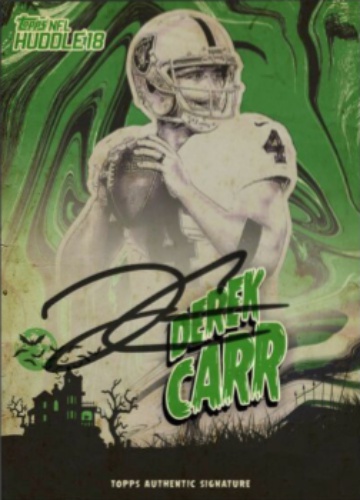 Derek Dallas Carr (born March 28, 1991) is an American football quarterback for the Las Vegas Raiders of the National Football League (NFL). He played college football at Fresno State, where he twice received first-team All-MWC honors, and was selected by the Raiders in the second round of the 2014 NFL Draft. A three-time Pro Bowl selection, Carr helped the Raiders reach the playoffs during the 2016 season, the franchise's first appearance since 2002. He led Las Vegas to another postseason berth in 2021. More about Derek Carr

Current items with a signature of Derek Carr

These are the most current items with a signature of Derek Carr that were listed on eBay and on other online stores - click here for more items.

Traded items with a signature of Derek Carr

If you're interested in Derek Carr Rookie cards you might want to take a look at our sister site that specializes in Football Rookie Cards only.

The most expensive item with a signature of Derek Carr (Derek Carr 2014 National Treasures Rookie Patch Auto RPA RC JSY Autograph PSA 10) was sold in November 2020 for $17733.00 while the cheapest item (Derek Carr Signed Card) found a new owner for $0.99 in August 2022. The month with the most items sold (64) was September 2021 with an average selling price of $101.25 for an autographed item of Derek Carr. Sold items reached their highest average selling price in May 2017 with $199.97 and the month that saw the lowest prices with $7.99 was October 2017. In average, an autographed item from Derek Carr is worth $57.88.

Most recently, these items with a signature of Derek Carr were sold on eBay - click here for more items.

Tony Romo breaks down Super Bowl LVII, plus Derek Carr drama continues and early (02/03/23): Here's everything you need to know about the NFL for Feb. 3

Derek Carr drama continues with Raiders: QB has no plans to help team by extendi (02/03/23): Things are getting awkward between Derek Carr and the Raiders

Dave Ziegler: There’s going to be teams interested in Derek Carr (02/2023): Derek Carr will represent the Raiders in the Pro Bowl games, his final time wearing the team’s gear. The questions are how and when Carr’s next team is decided. As much as the Raiders surely want to trade Carr, rather than cut him, it’s complicated. His contract includes $40.4 million in injury guar

The Athletic makes potential offer for Jets to land Derek Carr (12/2022): Would you go after Derek Carr? If so, what would you trade to get him?

Derek Carr limited with back issue (10/2022): Raiders quarterback Derek Carr missed one snap Sunday, finishing the game despite needing some medical attention during the game. The Raiders list him with a back injury, which limited him in Wednesday’s practice. It sounds as if Carr’s back issue won’t keep him out Sunday, but it’s something to mon

Report: Multiple teams have called Raiders about Derek Carr (03/2022): More teams are searching for a franchise quarterback than there are franchise quarterbacks. That’s why the Commanders have spoken to every team that might have one available. It’s also why “multiple teams” have expressed interest in Derek Carr, Vincent Bonsignore of the Las Vegas Review-Journal repo

What should Raiders do with the perplexing, polarizing Derek Carr? (01/2022): Carr holds most of the Raiders' passing records and led them to the playoffs, but is he worth a long-term deal?

Raiders call an awful screen pass at end of first half, give away 7 points to Br (12/2021): Derek Carr would like to have his throw at the end of the first half back.

On first possesion without Jon Gruden, Raiders score on a 48-yard touchdown pass (10/2021): Henry Ruggs reels in a long touchdown pass from Derek Carr to open the scoring against the Broncos.

Jon Gruden and Derek Carr's relationship like a 'corny marriage,' says Raiders G (07/2021): The honeymoon might be over, but the Las Vegas 'couple' continues to roll on

For Raiders' Derek Carr, no more excuses (real or imagined) (06/2021): Vegas has a new defensive coordinator and added receivers to an offense that has playmakers all over the field. It's time for Carr to just win, baby.

Carson Wentz trade: Colts first inquired about trading for Derek Carr but were t (02/2021): Carr is staying in Las Vegas, at least for the time being

Here's why Derek Carr continues to downplay Raiders rivalry with Chiefs as they (10/2020): The Chiefs and Raiders have met since the AFL formed in 1960, but the rivalry has been one-sided in recent years

Raiders, Derek Carr fumble away their shot at a win in New England (09/2020): After dominating the Patriots early on, penalties, turnovers and a missed field goal doomed Las Vegas (2-1) in the loss.

Raiders' Mike Mayock says Derek Carr has 'taken over this football team' ahead o (08/2020): Carr is entering his seventh year with the Raiders

Raiders GM: Carr played at 'high level' in '19 (02/2020): Raiders GM Mike Mayock gave a tepid vote of confidence to Derek Carr, saying the quarterback "played at a high level" in 2019 and that "we did a lot of really good things on offense."

Derek Carr exits to boos after Raiders lose final game in Oakland in devastating (12/2019): Sunday's celebration took a turn for the worse

Raiders’ 3-game winning streak comes to halt vs. Jets (11/2019): Derek Carr refused to downplay what had just happened to him and the Oakland Raiders. ''We got our butts kicked,'' Carr said after the Raiders' 34-3 loss to the New York Jets on Sunday. The Raiders (6-5) were 1-2 after a 34-14 loss at Minnesota in Week 3, but bounced back to win

Mic'd Up: Derek Carr checks in with Houston Texans quarterback Deshaun Watson af (10/2019): Join the Houston Texans on the sideline for their Week 8 win over the Oakland Raiders. This game is streaming live on the Yahoo Sports mobile app, or on CBS

Bengals mailbag: Driving for Carr and beasts from the East (02/2019): Could the Bengals make a swap-out at quarterback for Derek Carr? We connect the dots to see if it makes sense, while also looking at an interesting offensive line prospect from the Scandinavian region.

Former Raiders GM Reggie McKenzie leaves impact on Derek Carr, Gabe Jackson (12/2018): Raiders quarterback Derek Carr said he exchanged texts in “a good conversation” with Reggie McKenzie after McKenzie was released from his general-manager duties by the team Monday. Carr was part of McKenzie’s most successful draft class as the Raiders’ GM, a 2014 group that included edge rusher Khal

Fantasy Football Week 15 Sleepers: Run with Raiders this week with Derek Carr, J (11/2018): Jamey Eisenberg likes Doug Martin as a starting running back this week but also says you can trust Derek Carr and Jordy Nelson as sleepers in Week 15.

Derek Carr to speak at Bakersfield church services (01/2015): Oakland Raiders quarterback Derek Carr will return to his hometown this weekend for a church event.

James Jones: Derek Carr 'acts like he's 30 already' (11/2014): James Jones told "NFL AM" on Friday following the Raiders' first win of the season that the rookie QB Derek Carr is a "special player" who already has the attributes of a veteran.

Good Sports: Derek Carr (10/2014): On a steamy Friday night, Derek Carr was back at Bulldog Stadium, chasing 1-year-old son Dallas in the end zone instead of celebrating another touchdown pass. Happy to be back home.