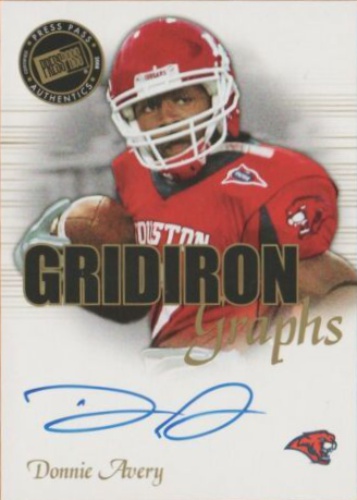 Donnie Dion Avery (born June 12, 1984) is a former American football wide receiver in the National Football League (NFL). He played college football at Houston and was drafted by the St. Louis Rams in the second round of the 2008 NFL Draft. Avery has also played for the Tennessee Titans, Indianapolis Colts and Kansas City Chiefs. More about Donnie Avery

Current items with a signature of Donnie Avery

These are the most current items with a signature of Donnie Avery that were listed on eBay and on other online stores - click here for more items.

Traded items with a signature of Donnie Avery

The most expensive item with a signature of Donnie Avery (2008 Exquisite Collection Rookie Signature Spectrum Donnie Avery PATCH AUTO 1/1) was sold in February 2021 for $166.50 while the cheapest item (2008 Sage Gold Level Donnie Avery Auto Signed 24/200 #A3 Houston Cougars) found a new owner for $0.25 in October 2021. The month with the most items sold (6) was April 2010 with an average selling price of $2.88 for an autographed item of Donnie Avery. Sold items reached their highest average selling price in February 2021 with $166.50 and the month that saw the lowest prices with $0.99 was August 2021. In average, an autographed item from Donnie Avery is worth $3.77.

Most recently, these items with a signature of Donnie Avery were sold on eBay - click here for more items.

Donnie Avery injury: Chiefs WR leaves with apparent concussion (01/2014): Avery is the second player being evaluated for a concussion after Chiefs running back Jamaal Charles was ruled out earlier in the game.

Donnie Avery injury update: Listed as probable, will play for fantasy owners (11/2013): Kansas City Chiefs wide receiver Donnie Avery (shoulder) practiced all week and will start on Sunday in the team's Week 9 match up against the Buffalo Bills . Avery has been battling the shoulder injury, but is yet to miss a game.

Donnie Avery tries to fool fantasy owners with breakout performance (09/2013): Loading... The Eagles secondary ranks towards the bottom of the league. Avery racked up most of his yardage after a few catches, breaking away from defenders who were nowhere near him at the time of the catch.

Donnie Avery could be Chiefs No. 2 WR, but fantasy upside remains low (08/2013): Kansas City Chiefs wide receiver Donnie Avery is currently expected to earn the No. 2 receiver position, according to ESPN's Bill Williamson . The Chiefs signed Avery to a three-year deal in the offseason, and he started behind Jon Baldwin on the depth chart after missing OTAs with an ankle injury.

Andrew Luck to Donnie Avery: Immortalized in Tecmo Bowl, Already (12/2012): How lucky is a franchise to go from Peyton Manning to Andrew Luck? It's just not fair.

Colts debuts of Coby Fleener, Jerrell Freeman, Donnie Avery show promise (09/2012): It wasn't the homecoming tight end Coby Fleener expected. Nor was it the kind of NFL debut linebacker Jerrell Freeman had envisioned for himself.