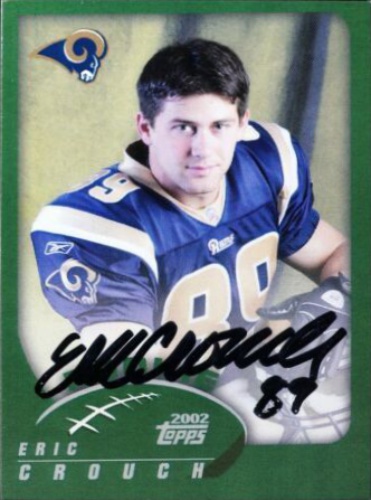 Current items with a signature of Eric Crouch

These are the most current items with a signature of Eric Crouch that were listed on eBay and on other online stores - click here for more items.

Traded items with a signature of Eric Crouch

If you're interested in Eric Crouch Rookie cards you might want to take a look at our sister site that specializes in Football Rookie Cards only.

Most recently, these items with a signature of Eric Crouch were sold on eBay - click here for more items.

Former Nebraska QB Eric Crouch left Jameis Winston off Heisman ballot (12/16/13): Jameis Winston became the youngest player to win the Heisman Trophy on Saturday night, and the 19-year-old won the award by the seventh-largest margin since it was first awarded in 1935.

Eric Crouch does some clowning, some winning at skills competition (07/2013): Former Husker Eric Crouch lifted his left foot off the ground and pulled the driver back with just his right hand, hovering over the golf ball he hoped to squib off the tee so horridly that he'd earn a victory in Wednesday's...

Shatel: Tommie Frazier's Hall of Fame wait was too long; Eric Crouch next? (05/2013): As Warren Sapp once said, “Thomas, where you been?” It's not where he's been, big man. It's where Tommie Frazier is going: to the College Football Hall of Fame.

A few minutes with … former Nebraska QB, current FX analyst and Heisman Trophy w (09/2012): Eric Crouch will be in Manhattan, Kan., on Saturday working his second game as a college football analyst for Fox Sports when Kansas State takes on Miami. You likely know him best as the former Nebraska quarterback who K-State famously beat in a 1998 classic.

Eric Crouch Out For Season (09/2011): The Omaha Nighthawks have place quarterback Eric Crouch on the injured reserve list.

Eric Crouch Has Advice For Husker QB (08/2011): Second-year starting quarterback for the Huskers, Taylor Martinez, is searching for consistency and is getting some words of wisdom from former NU signal caller and Heisman Trophy winner Eric Crouch.

Eric Crouch Tries Out for Nighthawks (06/2011): Eric Crouch is contemplating a comeback to professional football, trying out for the Omaha Nighthawks.