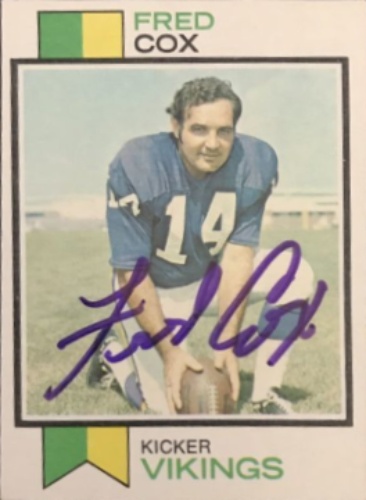 Frederick William Cox (December 11, 1938 – November 20, 2019) was an American professional football player who was a kicker for 15 seasons in the National Football League (NFL) for the Minnesota Vikings. After playing college football for Pittsburgh, he was drafted by the Cleveland Browns in the eighth round of the 1961 NFL Draft and by the New York Titans in the 28th round of the 1961 AFL Draft. He was also the inventor of the Nerf football. More about Fred Cox

Current items with a signature of Fred Cox

These are the most current items with a signature of Fred Cox that were listed on eBay and on other online stores - click here for more items.

Traded items with a signature of Fred Cox

Most recently, these items with a signature of Fred Cox were sold on eBay - click here for more items.

Fred Cox, Vikings Kicker and an Inventor of Nerf Football, Dies at 80 (11/23/19): He was a mainstay of a Vikings team that lost four Super Bowls and, while playing, helped create a squeezable foam toy that brought him decades of royalties.

Nerf football inventor Cox, ex-Vikes kicker, dies (11/21/19): Kicker Fred Cox, who never missed a game in 15 seasons with the Vikings and who invented the Nerf football in 1972, has died at the age of 80.

Obituaries: Fred Cox (10/07/13): For more than 70 years, Fred Cox was a pillar of the world of old-time variety with his identical twin brother, Frank. As leading members of the Royal Air Force gang shows, under the auspices...