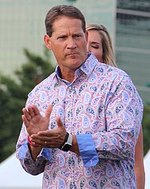 Eugene C. Chizik Jr. (born December 28, 1961) is an American football coach who is currently the Assistant Head Coach for Defense at North Carolina. A veteran of the coaching ranks, Chizik previously was UNC's defensive coordinator for the 2015 and 2016 seasons, and served as the head coach of the Auburn football team from 2009 until the end of the 2012 season. Chizik's 2010 Auburn Tigers football team completed a 14–0 season with a victory over Oregon in the BCS National Championship Game, and quarterback Cam Newton won the Heisman Trophy. Chizik played college football at the University of Florida in 1981 for head coach Charley Pell. More about Gene Chizik

Current items with a signature of Gene Chizik

These are the most current items with a signature of Gene Chizik that were listed on eBay and on other online stores - click here for more items.

Traded items with a signature of Gene Chizik

The most expensive item with a signature of Gene Chizik (auburn football gene chizik&cam&players signed fullsize) was sold in May 2011 for $349.99 while the cheapest item (Gene Chizik signed football) found a new owner for $0.06 in December 2012. The month with the most items sold (18) was January 2011 with an average selling price of $60.00 for an autographed item of Gene Chizik. Sold items reached their highest average selling price in February 2012 with $190.00 and the month that saw the lowest prices with $3.99 was October 2019. In average, an autographed item from Gene Chizik is worth $35.00.

Most recently, these items with a signature of Gene Chizik were sold on eBay - click here for more items.

Tar Heels' Chizik works to solve defensive troubles (09/09/22): CHAPEL HILL, N.C. (AP) Gene Chizik had seen just about everything in the more than three decades since he first took a college coaching job. Now the Tar Heels' defensive coordinator is trying to determine how to fix problems that led to what he called a final-quarter ''implosion'' against the Moun

Chizik, Warren return to Tar Heels in defensive-staff revamp (01/2022): CHAPEL HILL, N.C. (AP) North Carolina's revamp of its defensive coaching staff now includes the return of Gene Chizik, who led Auburn to a national championship as a head coach. The school announced Saturday the hiring of Chizik as assistant head coach for defense as well as the return of Charlton

Gene Chizik aims for championship (02/2015): Gene Chizik stands at the podium on Wednesday, addressing the media for the first time since being named North Carolina’s new defensive coordinator.

Q&A: Coach Gene Chizik on Auburn ouster, team's current success (11/2013): AUBURN, Ala. â?? Gene Chizik has been crossing a lot of items off his bucket list lately. In September, he saw a Boston Red Sox game at Fenway Park. In a couple weeks, he's attending the Army-Navy game, something he'd always wanted to experience.

PHOTO: Gene Chizik in 'cryosauna' device is the weirdest thing of the day (08/2013): I also do not know what a cryosauna is and refuse to look it up. What I know is that Gene Chizik currently lives an interesting life since being fired two years after winning a national championship. And also that, once steamed, Coach will be served to you on a platter with asparagus and cashews.

Former Auburn head coach Gene Chizik to host radio show (07/2013): Chizik doesn't have a lot of broadcasting experience, but he did help to provide analysis for ESPN's coverage of the 2011 BCS Championship Game, in which Alabama defeated LSU, 21-0.

Auburn fires Gene Chizik two years after national title (11/2012): The Tigers were 3-9 this season and were routed by archrival Alabama, 49-0, on Saturday. Gene Chizik led Auburn to perhaps the greatest season in the program's history, and two years later to maybe its worst.

Gene Chizik only has “one concern” (10/2012): Auburn head coach Gene Chizik speaking after the Tigers loss to Texas A&M Saturday, Oct. 27. I wanted to clarify something in the article….… With hula hoop you can burn some extra calories.…

Pat Dye Defends Gene Chizik (09/2012): Gene Chizik has been taking plenty of heat from fans wanting better results on the field. Pat Dye, however, has...

Auburn football notes: Tigers' physical play impresses coach Gene Chizik (08/2012): AUBURN, Ala. -- The Tigers have practiced twice since their second scrimmage on Saturday, and, after looking at the film, coach Gene Chizik said his team has shown signs of improvement. While not a finished product, Chizik was most impressed by how physical his team was.