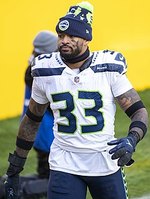 Jamal Lee Adams (born October 17, 1995) is an American football strong safety for the Seattle Seahawks of the National Football League (NFL). He played college football at LSU, and was drafted sixth overall in the 2017 NFL Draft by the New York Jets. Adams quickly became an impactful starter for the Jets, making the Pro Bowl twice and being named an All-Pro. In 2021, Adams signed a four year extension with the Seahawks valued at $72 million, with a $20 million signing bonus and a $38 million guaranteed, making him the highest paid safety in the NFL. More about Jamal Adams

Current items with a signature of Jamal Adams

These are the most current items with a signature of Jamal Adams that were listed on eBay and on other online stores - click here for more items.

Traded items with a signature of Jamal Adams

If you're interested in Jamal Adams Rookie cards you might want to take a look at our sister site that specializes in Football Rookie Cards only.

The most expensive item with a signature of Jamal Adams (FRAMED Autographed/Signed JAMAL ADAMS 33x42 New York Green Jersey JSA COA Auto) was sold in June 2020 for $399.99 while the cheapest item (Jamal Adams 3 Card Lot 2018 Rookie Optic Lime Prizm RC 2019 Absolute Autograph) found a new owner for $0.49 in October 2020. The month with the most items sold (17) was July 2020 with an average selling price of $25.99 for an autographed item of Jamal Adams. Sold items reached their highest average selling price in January 2018 with $120.00 and the month that saw the lowest prices with $1.63 was August 2015. In average, an autographed item from Jamal Adams is worth $24.99.

Most recently, these items with a signature of Jamal Adams were sold on eBay - click here for more items.

Jamal Adams goes on IR as he continues getting multiple medical opinions (09/15/22): Seahawks safety Jamal Adams went on injured reserve Thursday, three days after he tore a quadriceps tendon and injured his knee against the Broncos. That means he will miss a minimum of four games. Adams is expected to miss the rest of the season, but the Seahawks haven’t confirmed that yet. Gregg B

Seahawks' Jamal Adams out for 2022 season after suffering torn quad vs. Broncos, (09/15/22): The star safety was carted off Monday night

Seahawks' Jamal Adams suffers 'serious injury' to his quad during Week 1 win aga (09/13/22): Adams was carted off the field during the first half

Jamal Adams: Details on how Seahawks safety broke his finger (07/2022): Apparently Adams got his finger caught in another player's helmet, which led to the injury.

Seahawks take Jeremy Chinn over Jordyn Brooks in this 2020 redraft (06/2022): Any idea that might have prevented the regrettable Jamal Adams trade is probably a good thing.

Can new Seahawks defensive coordinator Clint Hurtt get Jamal Adams back to his 2 (02/2022): After setting the NFL DB single-season sack record in 2020, Adams disappeared from the Seahawks' pass rush in 2021, which Hurtt doesn't want to repeat.

Seattle’s losses are the Jets’ gain (11/2021): The deeper the hole goes for the Seahawks, the higher the climb for the Jets. With New York’s AFC team holding Seattle’s first-round pick in 2022 as a result of the Jamal Adams trade, and with the Seahawks in a full-blown tailspin, the Jets (from the Seahawks) currently have the fourth pick in the d

Agent's Take: Who'll benefit from Jamal Adams resetting the safety market, plus (08/2021): Which safety could cash in next? Two stand out

Adams reports to Seahawks amid negotiations (07/2021): Jamal Adams, who set an NFL record for sacks by a defensive back last season with 9.5, reported to Seahawks camp as negotiations on a contract extension continue.

The $20 million question: When will Seahawks extend Jamal Adams? (06/2021): Last year, Seattle traded two first-round picks for Adams, so it's a question of when -- not if -- he re-signs. The bigger question might be: How much?

Jamal Adams' extension leads Seattle Seahawks' offseason questions (02/2021): Adams wants to be the top-paid safety in the game, but his contract negotiations are one of many questions the Seahawks need to address.

NFC 2020 divisional round: Seahawks' Jamal Adams trolls Rams after Packers advan (01/2021): This will easily take the already potent rivalry to another level

Hapless Jets blitzed by Jamal Adams and the Seahawks, drop record 13th straight (12/2020): Sergio Castillo missed three field goal attempts in one quarter and Adams had a sack as the Jets remain in line for 0-16 and the No. 1 pick.

Seattle's Adams better after 'playing on one arm' (11/2020): After injuring his shoulder in Week 10, Seahawks safety Jamal Adams hasn't missed any time and is "getting better" after playing the past two games "with one arm."

Seahawks safety Adams out again vs. Vikings (10/2020): The Seahawks will be without All-Pro strong safety Jamal Adams for a second straight game when they host the Vikings on Sunday night.

Seahawks' Adams motivated to face Cowboys (09/2020): Set to face the Dallas Cowboys, his hometown team, Seattle Seahawks safety Jamal Adams said Thursday he has heard through the grapevine that the Cowboys don't think he's that good in coverage, providing a little extra motivation for Sunday's game.

Jamal Adams misses Seahawks practice after slicing his finger in a kitchen accid (08/2020): Slicing strawberries can be dangerous work, folks

Adams says his plan is to retire with Seahawks (07/2020): Jamal Adams said Thursday he was excited to be with the Seahawks and it's plan to one day retire with the team.

Jamal Adams trade rumors: Jets' Adam Gase says he wants All-Pro safety to stay w (06/2020): The Jets' head coach is hoping things can be rectified between the team and their star player

Jets' Joe Douglas to 'connect' with Jamal Adams after NFL Draft, plans to keep h (04/2020): The All-Pro safety's future in New York continues to be in serious doubt

Will Jamal Adams get record-setting deal from Jets? It's complicated (02/2020): The Jets are in no rush to extend their 2017 first-rounder, who has two years left on his deal.

Adams optimistic about deal as Jets begin talks (01/2020): Jamal Adams said Wednesday that he and the Jets have begun talks on an extension and he tweeted he believes a deal will be able to be struck.

Darnold leads Jets to third straight win, 34-3 over Raiders (11/2019): Jamal Adams and the New York Jets heard all the rowdy Raiders fans during pregame warmups, booing them and acting as if they were in Oakland. Then the Jets silenced them quickly with a dominant home victory. Sam Darnold threw two touchdown passes and ran for another score, leading the Jets past th

Jamal Adams pops up on Jets injury report (10/2019): Jets safety Jamal Adams wasn't happy with the fact that his name came up in trade talks ahead of Tuesday's deadline and said he doesn't know if he wants to remain with the team for the long term. He's still on the roster for the short term, but his availability for this Sunday's game