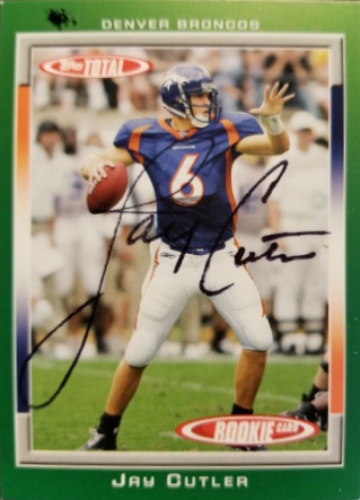 Jay Christopher Cutler (born April 29, 1983) is a former American football quarterback who played in the National Football League (NFL) for 12 seasons, primarily with the Chicago Bears. He played college football at Vanderbilt and was selected by the Denver Broncos in the first round of the 2006 NFL Draft, who he was a member of for three seasons. In 2009, he was traded to the Bears, where he played eight seasons. Cutler retired after being released by Chicago in 2017, but returned for an additional season with the Miami Dolphins. He retired a second and final time following the 2017 season. More about Jay Cutler

Current items with a signature of Jay Cutler

These are the most current items with a signature of Jay Cutler that were listed on eBay and on other online stores - click here for more items.

Traded items with a signature of Jay Cutler

Most recently, these items with a signature of Jay Cutler were sold on eBay - click here for more items.

Jay Cutler doesn’t want to see the Bears move out of Soldier Field (07/01/22): The former Bears quarterback isn't a fan of the team potentially moving out of Chicago and into the suburbs.

Brandon Marshall speaks on 'tumultuous' relationship with Jay Cutler during Bron (11/10/20): Marshall and Cutler had their ups and downs, but there will always be respect there

Jay Cutler: How the former QB solved the 'chicken serial killer' mystery on his (07/01/20): Cutler has solved the case

Jay Cutler: Explaining the 'chicken serial killer' mystery on the former QB's fa (06/30/20): Cutler has his suspects lined up

Bears Franchise Five: Jay Cutler edges Sid Luckman at QB on list of Chicago's al (06/02/20): As one of the oldest franchises in NFL history with a record 27 Hall of Famers, this Bears list was no easy task

Compare and contrast: Jay Feely on Jay Cutler, Ryan Pace on Drew Brees (01/2015): Jay Feely was a Bear for a month and figured it out: Jay Cutler isn’t a leader and can’t grow into it.

Is Jay Cutler still with the Bears in 2015? (12/2014): On Pro Football Now, Sports Illustrated senior writer Don Banks and The MMQB contributor Jenny Vrentas discuss if the Chicago bears will try to...

Jay Cutler says Bears must 'get creative' against Lions (11/2014): The Chicago Bears have not consistently established their vertical passing game this season, as opponents have prioritized taking that away and testing quarterback Jay Cutler’s willingness to check down.

Analysts: Bears' problems are more than just Jay Cutler (10/2014): Quarterback Jay Cutler’s inconsistency protecting the ball is a major reason why the Chicago Bears are a disappointing 3-5. But their list of problems is much longer than that, as Sunday’s 51-23 loss to the New England Patriots reminded us.

ProFootballTalk: Will the real Jay Cutler please stand up? (09/2014): The PFT crew takes a look at the players and teams who have shown flashes of really good play and flashes of poor play. Ross Tucker is wondering which Jay Cutler will show up for the rest of the year.

Kristin Cavallari Wishes Husband Jay Cutler a Happy Birthday, Goes Without Makeu (04/2014): Soon there will be four to celebrate! Kristin Cavallari wished her husband Jay Cutler a very happy birthday as he turned 31 on Tuesday, April 29. The Hills alum, who's expected to welcome the couple's second child any day now, did so as she shared a sweet snapshot of the twosome via Instagram.

Kristin Cavallari Says Jay Cutler Gets Weird About Pregnancy Sex (03/2014): It looks like Kristin Cavallari is having a bit of a hard time getting her quarterback husband Jay Cutler to score in the bedroom. At least while she's expecting their second child, that...

Signing Jay Cutler solidifies Bears offense (01/2014): And under Marc Trestman it will lead way into future and allow them to concentrate now on rebuilding inadequate defense In today's NFL, the quarterback is king.

Jay Cutler aware return to Chicago Bears still uncertain (12/2013): Jay Cutler wants to remain with the Chicago Bears, but the quarterback is aware that a scenario might arise in which the sides can't come to an agreement.

Jay Cutler: Week 13 Fantasy Outlook (11/2013): Cutler won't play in Week 13 at Minnesota. The Bears' quarterback will miss his third straight game due to a high ankle sprain. Cutler is targeting Week 14's contest against Dallas for his return. Josh McCown will continue to start in Cutler's absence.

Kristin Cavallari and Jay Cutler expecting second child (10/2013): Kristin Cavallari and her NFL quarterback husband, Jay Cutler, are adding to their family, and the one-time reality TV star thanked fans via Twitter for their well wishes on Wednesday.Cavallari starred on "Laguna Beach: The Real Orange County" and the spin-off series "The Hills.

Jay Cutler leads sharp Chicago Bears offense in win (08/2013): Chicago Bears fans liked what they saw from Jay Cutler and the team's offense Friday night. The Cutler-led unit clicked on all cylinders during a preseason win over the Oakland Raiders.

Chicago Bears: Jay Cutler likely has to wait for new deal (07/2013): BOURBONNAIS, Ill. -- If Jay Cutler wants a new contract from the Chicago Bears, it looks as if he'll have to wait until the end of the season.

Signed artwork of Jay Cutler aids girl's Kiss A Pig fundraiser (04/2013): DECATUR — When the American Diabetes Association reached out to Decatur airbrush painter Ed Lozano to support its annual Kiss a Pig fundraiser, he described the decision as “a no-brainer.”

Jay Cutler not exactly sentimental about Lovie Smith (12/2012): On the day Lovie Smith was fired by the Chicago Bears, quarterback Jay Cutler said he felt like he let his coach down. At the same time, Cutler didn't see Smith's exit as a detrimental action.

Chicago Bears' Jay Cutler fined $10K by NFL for taunt (11/2012): Chicago Bears quarterback Jay Cutler has been known to show a bit of an attitude, and he wasn't afraid to do just that to one Minnesota Viking. The NFL decided to make Cutler pay for it.

Jay Cutler Does Not Care What Anyone Thinks About Him (10/2012): Embattled Chicago Bears quarterback Jay Cutler has been criticized often, but does he care? All he cares about is winning. Contributor: Jonathan Peralta Published: Oct 29, 2012

Chicago Bears vs. Cleveland Browns: Watch Live Stream Online, Preview, Predictio (08/2012): The Chicago Bears face the Cleveland Browns in each team’s final 2012 preseason game. Here’s how to watch a live stream online, as well as a preview and prediction for the contest.

QB Jay Cutler shows his sarcastic side -- again -- during chat with media (07/2012): Jay Cutler's sarcastic, and sometimes snippy, answers often rattle the media. He was at it again Tuesday.

Jay Taft: Jay Cutler on verge of pulling Bears off ugly list (06/2012): Joe Namath did it way back in 1967. Peyton Manning has done it 11 times. Six quarterbacks have done it four or more times.

Jay Cutler up, down in new offense at Chicago Bears' OTA (05/2012): LAKE FOREST — During one play in the team’s seven-on-seven drills to close out the OTA practice session Wednesday, quarterback Jay Cutler put way too much air under a pass and was easily picked off by new Bear corner Jonathan Wilhite.

Jay Cutler Foundation grant will fund camp for diabetic children (12/2011): Rebecca Winsett had practiced her lines over and over again for her meeting with pro football star Jay Cutler before the Chicago Bears' Dec. 4 home game.

Jay Cutler: Don't hold your breath (11/2011): JAY CUTLER isn't sure he'll throw another pass for the Chicago Bears this year. Speaking to reporters for the first time yesterday since he broke the thumb on his right (throwing) hand against San Diego 2 weeks ago, Cutler said he might be finished for the season.

Mike Martz is 'Giddy' About Jay Cutler (08/2011): Mike Martz spoke to the media for the first time in camp, and as usual, he found a way of being entertaining without trying.

Here's some advice for Bears QB Jay Cutler (02/2011): It’s been more than three weeks since Jay Cutler’s infamous knee injury in the NFC Championship game, and the Chicago Bears quarterback is still the No. 1 topic people bring up to me.

Ed Berliner: Jay Cutler Brings Out a Yellow Streak in Fellow Players (01/2011): The Chicago Bears fans who burn Cutler jerseys and scream that he's a quitter are venting over coming so close and falling short to a better team. Key word there being "team."

Jets Game Day: Shaun Ellis, defensive line looking to knock down Bears QB Jay Cu (12/2010): THIS WEEK’S GAME REVOLVES AROUND ... He’s the Jets sack leader on the defensive line with 4½. And though the numbers may not be overwhelming, anyone with Ellis’ pass-rushing potential is a cause for concern for the Bears. On the year, Chicago has allowed a league-high 48 sacks.