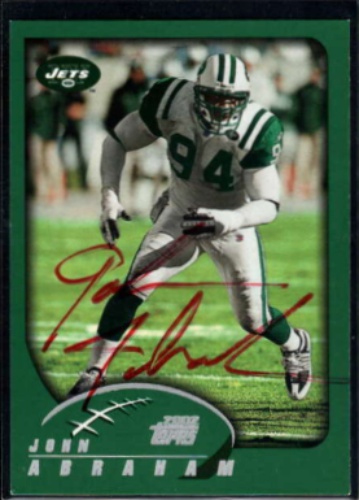 John Abraham (born 17 December 1972) is an Indian actor and film producer who works in Hindi films. Known for his stoic action hero persona, he has won a National Film Award (as producer) and received five Filmfare nominations. More about John Abraham

Current items with a signature of John Abraham

These are the most current items with a signature of John Abraham that were listed on eBay and on other online stores - click here for more items.

Traded items with a signature of John Abraham

The most expensive item with a signature of John Abraham (NEUFC Jersey Autographed by Bollywood Actor John Abraham) was sold in February 2016 for $366.00 while the cheapest item (John Abraham SIGNED 2000 Press Pass RC AUTO!) found a new owner for $0.49 in June 2010. The month with the most items sold (6) was August 2022 with an average selling price of $0.99 for an autographed item of John Abraham. Sold items reached their highest average selling price in February 2016 with $366.00 and the month that saw the lowest prices with $0.49 was June 2010. In average, an autographed item from John Abraham is worth $10.00.

Most recently, these items with a signature of John Abraham were sold on eBay - click here for more items.

John Abraham: Acting is my first love (03/17/15): It's been long since we saw John Abraham on the big screen. His last film MADRAS CAFE released more than

John Abraham to show his butt again? (03/17/15): Charming Bollywood actor John Abraham, who flaunts his chiseled body in almost every film went a

John Abraham works his muscles for Rocky Handsome, Dishoom (03/17/15): A look at the top tweets from your favourite Bollywood celebrities.

Vipul Shah, John Abraham and Abhinay Deo team up for 'Force 2' (03/13/15): The 2011 action thriller Force not only created waves at the Box Office, but was also well appreciated by film critics and audiences alike, resulting in the making of its sequel.

John Abraham: There is no double meaning in WELCOME BACK (03/13/15): Handsome hunk John Abraham, who was last seen in MADRAS CAFE

John Abraham: 1911 with Shoojit is on priority list (03/2015): Contrary to the reports doing the rounds that Shoojit Sircars John Abraham starrer 1911 has been

John Abraham shoots for ‘Welcome Back’ at Dubai (02/2015): Mumbai: The entire cast of 'Welcome Back' including lead actors John Abraham, Shruti Hassan, Nana Patekar and Anil Kapoor were in for a huge surprise when they shot for a particular sequence in ‘The House Of Gold’ in Dubai. The house in the film belongs to Paresh Rawal's character, features

Abhishek Bachchan: 'John Abraham is one of my favourite co-stars' (01/2015): The actor reveals he and Abraham were keen to work together again.

When Bipasha Basu ignored John Abraham... (12/2014): According to a Mid-day report, while promoting Alone on a TV show, Bipasha Basu was asked to rate male actors on their hotness quotient, including John Abraham.

Shruti Haasan, John Abraham and Shiney Ahuja shoot for 'Welcome Back' (11/2014): Loading... Please Wait This question is for testing whether you are a human visitor and to prevent automated spam submissions.

John Abraham talks on his first day of camp (08/2014): Cardinals defensive standout John Abraham reports to training camp in Glendale and spoke to reporters about his arrival.

John Abraham found passed out (07/2014): An officer found John Abraham passed out behind the wheel of his black Dodge Challenger at around 4 p.m. ET June 29 at the intersection of an Atlanta suburb after he had left the Pink Pony strip club, according to a police report.

John Abraham to cameo in Satrah Ko Shaadi Hai (04/2014): The film will be produced by the actor, and directed by Shootjit Sircar.

John Abraham shoots despite injury (03/2014): We hear John Abraham completed shooting the climax of Welcome Back despite a back injury. The sequence required him to do some heavy-duty stunts, including jumping from bikes, helicopters and even camels. Our source says, “The climax was shot in a desert. It is anyway difficult to perform stunts

John Abraham planning film on motorcycle racing (12/2013): Mumbai, Dec 25: Actor-producer John Abraham, known for his love for the mean machines, is currently planning a film on motorcycle racing. The actor, who made a whole new style statement in Bollywood with his biking acts in action movie 'Dhoom', took to Twitter to announce the same. "We need a

John Abraham: Human beings freak me out (09/2013): John Abraham talks about being the face of National Geographic Channel (NGC).

'Madras Cafe' is growing by word-of-mouth: John Abraham (08/2013): John played the role of an undercover agent in 'Madras cafe' which is set in the backdrop of Sri Lankan civil war.