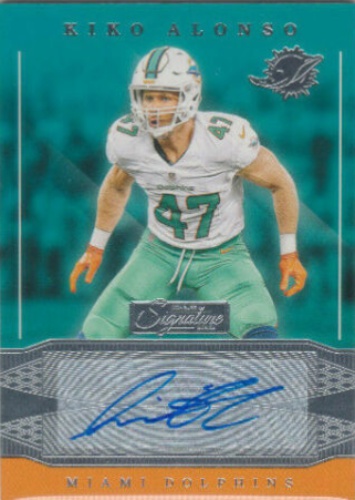 Kristian "Kiko" Alonso (born August 14, 1990) is a former American football linebacker. He was drafted by the Buffalo Bills in the second round of the 2013 NFL Draft. More about Kiko Alonso

Current items with a signature of Kiko Alonso

These are the most current items with a signature of Kiko Alonso that were listed on eBay and on other online stores - click here for more items.

Traded items with a signature of Kiko Alonso

The most expensive item with a signature of Kiko Alonso (KIKO ALONSO SIGNED AUTO OREGON DUCKS FULL SIZE HELMET SI AUTOGRAPHED) was sold in October 2016 for $159.00 while the cheapest item (KIKO ALONSO 2013 PANINI BLACK FOOTBALL ROOKIE AUTOGRAPH AUTO CARD #D 169/199) found a new owner for $0.99 in September 2022. The month with the most items sold (7) was November 2013 with an average selling price of $39.99 for an autographed item of Kiko Alonso. Sold items reached their highest average selling price in April 2017 with $100.00 and the month that saw the lowest prices with $0.99 was March 2018. In average, an autographed item from Kiko Alonso is worth $18.95.

Most recently, these items with a signature of Kiko Alonso were sold on eBay - click here for more items.

Linebacker Kiko Alonso retires one day after signing with Saints, per report (08/06/22): Alonso took part in one training camp practice for New Orleans before making his decision

Reports: Kiko Alonso signing with the Saints (08/2022): It looks like linebacker Kiko Alonso will be rejoining the Saints. Alonso was one of three veteran linebackers to work out for the team on Thursday and multiple reports indicate that they will be signing him to their 90-man roster. Alonso played 13 games for the Saints during the 2019 season, so he’

Saints get 49ers LB Alexander for Alonso, pick (11/2020): The Saints acquired LB Kwon Alexander from the 49ers in exchange for LB Kiko Alonso and a conditional fifth-round draft pick.

Source: Saints' Alonso has torn ACL for 3rd time (01/2020): Kiko Alonso, who suffered the tear in the Saints' loss to the Vikings, has now torn his ACLs three times dating to college.

Saints rule out starting LBs Klein, Alonso vs. 49ers (12/2019): The Saints have ruled out strongside linebacker A.J. Klein because of a knee injury and middle linebacker Kiko Alonso because of a thigh injury.