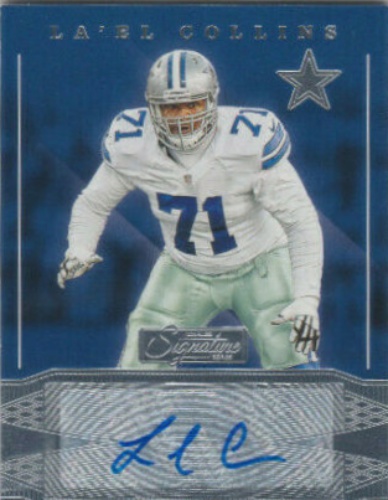 Current items with a signature of La'el Collins

These are the most current items with a signature of La'el Collins that were listed on eBay and on other online stores - click here for more items.

Traded items with a signature of La'el Collins

If you're interested in La'el Collins Rookie cards you might want to take a look at our sister site that specializes in Football Rookie Cards only.

Most recently, these items with a signature of La'el Collins were sold on eBay - click here for more items.

Ted Karras has a full practice for the Bengals on Wednesday (01/25/23): The Bengals rebuilt their offensive line after Joe Burrow led the league with 51 sacks in 2021 and took another 19 in four postseason games. But the Bengals have taken some hits in their line since Week 15. Right tackle La'el Collins is out for the year with a torn ACL. Right guard Alex Cappa [more]

Joe Burrow: We have a lot of faith in everyone on offensive line (01/16/23): The Bengals made it to the Super Bowl last year despite playing with a leaky offensive line that they worked hard to upgrade during the offseason, but they’re back to having questions up front again this January. Right guard Alex Cappa and right tackle La'el Collins were both missing in action at th

Zac Taylor “still gathering information” on La’el Collins, optimistic about Hayd (12/27/22): After Bengals offensive tackle La'el Collins suffered a knee injury during Sunday’s victory over the Patriots, a report emerged that Collins had torn his ACL and MCL. On Tuesday, head coach Zac Taylor did not confirm that report. But he did concede it’s unlikely to end up being good news on Collins

Bengals' La'el Collins out for season after tearing ACL and MCL vs. Patriots, pe (12/25/22): Collins signed with Cincinnati this offseason

La’el Collins drops wicked shot at Saints’ Cam Jordan after Bengals vs. Saints (10/2022): La'el Collins...did not hold back when asked about his matchup with the Saints star.

Zac Taylor optimistic La’el Collins will play against Jets (09/2022): Cincinnati’s pass protection has been a mess through the first two weeks of the season, with quarterback Joe Burrow taking a league-leading 13 sacks. But it seems like the Bengals will at least have their right tackle for Sunday’s game against the Jets. Via Geoff Hobson of the team’s website, head c

La’el Collins does first 11-on-11 work of summer (08/2022): Bengals tackle La'el Collins has missed practice time this summer with a back injury and to attend to personal matters, but he’s making his way back to full speed. Collins took part in 11-on-11 drills for the first time at Friday’s practice and said afterward that he felt like things are starting to

Bengals OT La’el Collins dealing with back issue before training camp (07/2022): A back issue landed La'el Collins on the NFI list, per coaches.

La’el Collins talks about his Bengals tattoo (06/2022): The new offensive tackle has a certain tiger on his leg.

Stephen Jones on critics of Cowboys moves: You don’t win the Super Bowl in the o (04/2022): The Cowboys had to part ways with players like wide receiver Amari Cooper and tackle La'el Collins as they managed their salary cap this offseason and it hasn’t been hard to find those who think their moves so far this offseason have not added up to an improved team in Dallas. Executive vice preside

Micah Parsons says Cowboys’ offensive line taught him in camp how to be a pro pa (02/2022): Cowboys linebacker Micah Parsons was the unanimous choice for defensive rookie of the year, but he didn’t do it himself. Parsons said on PFT Live that working with the Cowboys’ offensive linemen, particularly Tyron Smith and La'el Collins, made a big difference in his development. “They kind of took

Cowboys' injured band of players back together, ready to play (07/2021): Dak Prescott, Blake Jarwin, La'el Collins, Zack Martin and Tyron Smith formed a bond through their rehab. Now, "let's go do this" is their mantra.

Dak Prescott: These three Cowboys are 'most important, if you ask me' (06/2021): The quarterback is well aware of how vital the returns of offensive linemen Tyron Smith, La'el Collins and Zack Martin will be to the Cowboys' offense.

Cowboys' Tyron Smith, La'el Collins fully recovered from 2020 injuries, are both (05/2021): Dak Prescott's bodyguards are back, and that's a big deal for Dallas

La'El Collins injury update: Cowboys right tackle will undergo hip surgery, will (10/2020): The starting right tackle has officially been shut down until 2021

Ranking the Cowboys biggest 2020 salary cap bargains: The La'el Collins deal is (07/2020): Michael Gallup will have the 99th-highest cap hit among wide receivers in 2020