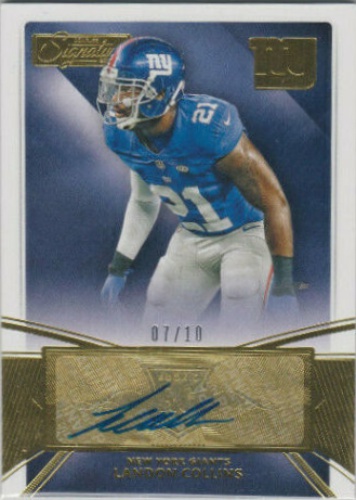 Landon Alexander Collins (born January 10, 1994) is an American football strong safety who is a free agent. He played college football at Alabama, where he was a part of the team that won the 2013 BCS National Championship Game. He was selected by the New York Giants in the second round of the 2015 NFL Draft. Collins was named to the 2016 All-Pro Team and went to three Pro Bowls during his tenure with them. He has also played for the Washington Redskins / Football Team. More about Landon Collins

Current items with a signature of Landon Collins

These are the most current items with a signature of Landon Collins that were listed on eBay and on other online stores - click here for more items.

Traded items with a signature of Landon Collins

The most expensive item with a signature of Landon Collins (LANDON COLLINS signed Full Size Custom Helmet New York Giants Black Matte JSA) was sold in November 2017 for $599.99 while the cheapest item (Landon Collins 2015 HIT Autographed Rookie Card Alabama New York Giants) found a new owner for $0.10 in January 2016. The month with the most items sold (9) was August 2021 with an average selling price of $2.25 for an autographed item of Landon Collins. Sold items reached their highest average selling price in August 2014 with $134.99 and the month that saw the lowest prices with $0.99 was November 2019. In average, an autographed item from Landon Collins is worth $27.50.

Most recently, these items with a signature of Landon Collins were sold on eBay - click here for more items.

Collins 'thankful' as LB joins Giants active roster (12/22/22): LB Landon Collins, who had been on the Giants practice squad since October, was being signed to the active roster after his role increased against Washington.

Safety Landon Collins gets another chance with Giants (12/22/22): EAST RUTHERFORD, N.J. (AP) Safety Landon Collins has had two stints with the New York Giants. The first was in 2015 when the Giants jumped up in the second round of the draft and made a trade with the Tennessee Titans for the first pick in the round and grabbed Collins. The Giants let Collins tes

Giants to sign Landon Collins to active roster (12/22/22): Landon Collins‘ return to the Giants has gone well enough for him to earn a permanent spot on the active roster. The Giants have used up Collins’ temporary elevations since he rejoined the team earlier this season and head coach Brian Daboll said on Thursday that they will be signing him off of the

Giants waive Tae Crowder (12/20/22): The Giants waived waived third-year linebacker Tae Crowder on Tuesday, the team announced. His departure makes room for a roster spot for defensive back Landon Collins. Crowder started the first eight games this season before losing his job. He has played only 46 defensive snaps in five games since

Giants to discuss signing Landon Collins to 53-man roster (12/2022): The Giants will discuss veteran Landon Collins' spot on the roster going forward at some point during the week.

Giants LB Ojulari to IR; Collins to debut vs. Jags (10/2022): Giants linebacker Azeez Ojulari suffered a setback this week and was placed on injured reserve. Landon Collins was added to the roster and will make his season debut against the Jaguars.

Why Kyle Hamilton makes sense for Commanders in the draft (04/2022): With Landon Collins gone, Washington needs a hybrid safety/linebacker for its nickel defense.

FA Eric Reid: Declined Washington prax squad (10/2020): With the loss of Landon Collins, the Washington Football Team offered a practice squad spot to free-agent safety Eric Reid, he told The Associated Press. But he declined, saying the practice squad wasn't "reflective or indicative of my career."

Landon Collins high on Redskins cornerback Jimmy Moreland in 2020, here's why he (05/2020): Collins urged fans to keep an eye on this second-year player in 2020

Landon Collins is the NFC defensive player of the week (10/2019): Washington paid a handsome sum to get safety Landon Collins to sign with the team as a free agent this offseason and they got some return on their investment in their first win of the 2019 season. Collins had 12 tackles, a tackle for loss and a forced fumble and two passes defensed against the [more