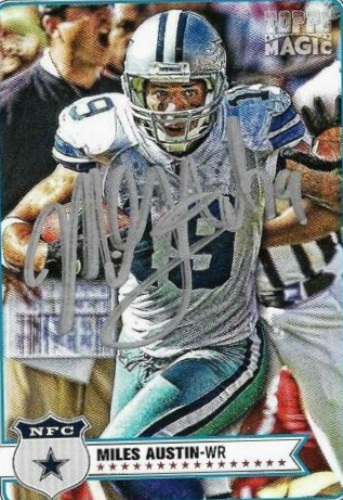 Miles Jonathon Austin III (born June 30, 1984) is an American football coach and former wide receiver who is the wide receivers coach for the New York Jets of the National Football League (NFL). He previously played in the NFL for 10 seasons, primarily with the Dallas Cowboys. Austin played college football at Monmouth, where he set the school's record for receiving yards. More about Miles Austin

Current items with a signature of Miles Austin

These are the most current items with a signature of Miles Austin that were listed on eBay and on other online stores - click here for more items.

Traded items with a signature of Miles Austin

If you're interested in Miles Austin Rookie cards you might want to take a look at our sister site that specializes in Football Rookie Cards only.

Most recently, these items with a signature of Miles Austin were sold on eBay - click here for more items.

NFL suspends Jets receivers coach Miles Austin for betting on sports other than (12/23/22): Do as we say, not as we profit from. The NFL, which has embraced a major revenue stream from partnerships with multiple sports books that legally offer sports betting in most states, prevents NFL personnel from wagering on any sports. Jets receiver Miles Austin apparently bet on sports other than fo

Shawn and Sylvia Cumberland are demanding changes to hazing regulations after their son, Nicky, died in a car crash.

Terry's Talkin' about Cleveland Browns, Barkevious Mingo and Miles Austin -- Ter (10/2014): This is a game where the Browns defense needs to take control.

Miles Austin eager for fresh start with Browns (07/2014): BEREA, Ohio (AP) — Not too long ago, Miles Austin was on his way to becoming one of the elite wide receivers in the NFL. But nagging hamstring injuries got in the way, and the two-time Pro Bowler was released by the Dallas Cowboys after last season.

Cowboys designate Miles Austin as June 1 cut (03/2014): By releasing the eight-year veteran, the Cowboys will save about $5.5 million in salary cap space, money they likely will use to sign this year's draft picks.

Miles Austin gets his due (02/2014): The most decorated player in the history of Monmouth University football will be getting his just due later this month.

Miles Austin expected to be released, per report (01/2014): The Cowboys are currently projected to be roughly $25 million over the 2014 salary cap. Dallas will have to make several moves in order to clear the necessary space and releasing Austin might be one of the more likely moves.

Miles Austin injury update: 'Out' status gives him no value for Week 4, so who s (09/2013): Loading... Miles Austin (hamstring) has been ruled out for Sunday's game against the Chargers . He did not practice this week and could miss more time.

Miles Austin expected to play for Dallas Cowboys (11/2012): Miles Austin was forced out of the Dallas Cowboys' loss on Thanksgiving Day with hip and back injuries. Will he get the chance to show his stuff against a struggling Eagles secondary?

Jerry: Miles Austin Not Likely To Return This Week (08/2012): Jerry Jones said over the weekend that he doesn't expect injured receiver Miles Austin to return in the next week. Photo Credit: Getty Images

Cowboys' Miles Austin, Felix Jones give back at Tulsa camp (06/2012): On his 28th birthday, Miles Austin could be found on a Tulsa football field in 100-degree heat.

Miles Austin out for at least two more weeks (09/2011): Cowboys WR Miles Austin will be out until at least Week 6.

Miles Austin Out With a Hamstring Injury (08/2011): Austin's injury forces a spotlight on wide receiver depth.

Miles Austin Tweet Up Party (01/2011): Austin sends fans on a scavenger hunt by tweeting out clues to the location of his pre-Super Bowl Party. It all started with a tweet from Dallas Cowboys Wide Receiver Miles Austin that said, "Want to party with me? Stay tuned for clues."