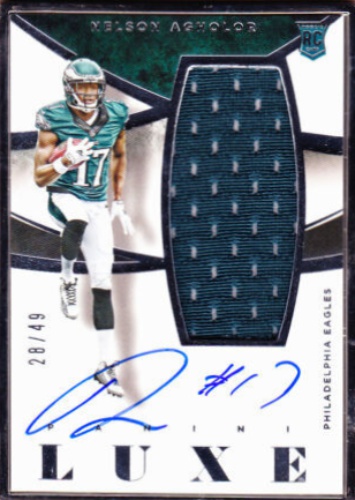 Nelson Efamehule Agholor (born May 24, 1993) is a Nigerian-American football wide receiver for the New England Patriots of the National Football League (NFL). He played college football at USC and was selected by the Philadelphia Eagles in the first round of the 2015 NFL Draft. During his five seasons with the Eagles, he won a Super Bowl title in Super Bowl LII. Agholor also played one season with the Las Vegas Raiders before joining the Patriots. More about Nelson Agholor

Current items with a signature of Nelson Agholor

These are the most current items with a signature of Nelson Agholor that were listed on eBay and on other online stores - click here for more items.

Traded items with a signature of Nelson Agholor

Most recently, these items with a signature of Nelson Agholor were sold on eBay - click here for more items.

NFL, NFLPA conducting joint review of handling of Patriots WR DeVante Parker's h (12/13/22): Parker was stumbling after getting up from a first-half hit, and teammate Nelson Agholor waved to officials to stop play

Patriots WR Nelson Agholor pleads for game stoppage after spotters appear to mis (12/13/22): A Cardinals challenge ultimately stopped the clock and prevented Parker from risking further injury with another play.

Nelson Agholor 34-yard touchdown ties score at 7-7 (11/25/22): The Vikings got off to a hot start against the Patriots on Thanksgiving night, scoring a touchdown to cap an eight-play, 80-yard drive. But it didn’t take long at all for New England to erase Minnesota’s early advantage. The Patriots went right down the field, scoring on a 34-yard touchdown pass fro

Patriots' WR Nelson Agholor, OT Isaiah Wynn react to trade buzz (10/30/22): With the trade deadline approaching Tuesday, Agholor and Wynn offer different takes on what it's like to be in trade rumors.

Monday Night Football: Mac Jones, Damien Harris, Nelson Agholor are active (10/2022): The Patriots will have Mac Jones back at quarterback. He is active for Monday Night Football after being listed as questionable with his high ankle sprain. He returns to the lineup for the first time since spraining an ankle on the final play in Week 3. Receiver Nelson Agholor (hamstring) and runnin

Ravens' Peters rounding into form after missing 2021 season (09/2022): OWINGS MILLS, Md. (AP) Last week with the Patriots trying to rally in the fourth quarter, New England wide receiver Nelson Agholor fumbled after catching a short pass from Mac Jones. It was another big turnover for the Baltimore defense - and it capped an impressive turnaround for Peters in his se

Projecting Patriots starters for 2022: What to do with Nelson Agholor, Jonnu Smi (05/2022): How can the Patriots get Nelson Agholor and Jonnu Smith on the field? And how will the linebacker spots shake out?

Robert Kraft: We’re making changes to take advantage of what Nelson Agholor, Jon (04/2022): The Patriots were one of the busiest teams in free agency last year and their activity included signing wide receiver Nelson Agholor and tight end Jonnu Smith to contracts. Neither player produced at the level the team was likely hoping to see when the deals were struck. Agholor posted 896 yards on

Patriots vs. Dolphins Week 18 injury report: Nelson Agholor returns to practice (01/2022): The Patriots had a veteran wide receiver return to practice Wednesday as they prepare to play the rival Dolphins on the road in the Week 18 regular season finale.

Patriots vs. Jaguars injury report: Nelson Agholor (concussion) ruled out (12/2021): The Patriots will once again be without Nelson Agholor when they play the Jaguars in Sunday's Week 17 game at Gillette Stadium.

Referees may have missed potential face mask penalty in Patriots' overtime loss (10/2021): The play occurred on a third-and-3 pass to Nelson Agholor

Week 2's biggest fantasy football questions: 32 NFL reporters give advice (09/2021): Is Nelson Agholor the Patriots' No. 1 wideout? What's the deal with Brandon Aiyuk in San Francisco? Our reporters fill you in before Sunday's games.

Nelson Agholor not motivated to face Eagles in joint practice, excited for oppor (08/2021): Agholor experienced the highs and lows in his five years with the Eagles

Gus Edwards, Nelson Agholor among top last-minute pickups for Week 17 (12/2020): If you need an injury replacement, or need to block your championship opponent from picking up a player who can beat you, we have potential options.

Mike Mayock believes Nelson Agholor is 'on a mission' with Raiders and here's ho (08/2020): Agholor is getting a fresh start with the Raiders after five interesting seasons with the Eagles

Raiders sign former Eagles receiver Nelson Agholor to one-year deal, per report (03/2020): A first-round pick of Philadelphia in 2015, the wideout figures to compete for a starting role

Eagles opt to keep only three receivers active vs. Redskins after Nelson Agholor (12/2019): It's a bold strategy, Cotton

NFL trade deadline: Four players Eagles could deal, with Nelson Agholor the obvi (10/2019): These players could help the Eagles get the player they desire at the trade deadline