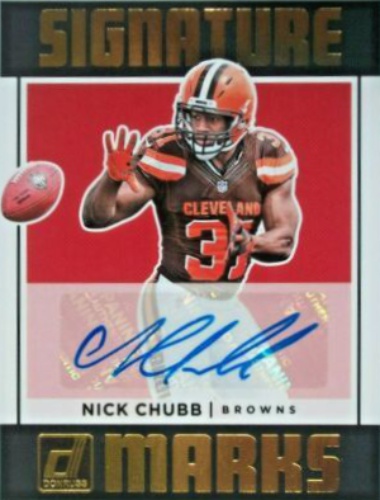 Nicholas Jamaal Chubb (born December 27, 1995) is an American football running back for the Cleveland Browns of the National Football League (NFL). He played college football at Georgia and was drafted by the Browns in the second round of the 2018 NFL Draft. Chubb has been named to four Pro Bowls during his NFL career. More about Nick Chubb

Current items with a signature of Nick Chubb

These are the most current items with a signature of Nick Chubb that were listed on eBay and on other online stores - click here for more items.

Traded items with a signature of Nick Chubb

If you're interested in Nick Chubb Rookie cards you might want to take a look at our sister site that specializes in Football Rookie Cards only.

Most recently, these items with a signature of Nick Chubb were sold on eBay - click here for more items.

NFL odds, betting: Expect a slugfest in this AFC North matchup (12/06/22): Nick Chubb and Joe Mixon could see a bulk of the workload. Let's back the under.

Nick Chubb, Cleveland Browns lighting up Bengals (11/01/22): The Browns gave their fans a Halloween treat with a strong performance against the Bengals

WATCH: Nick Chubb puts the Browns on top vs. Bengals on direct snap (11/01/22): The Browns have taken the lead over the Bengals in the second quarter as Nick Chubb runs it in for six.

WATCH: Browns score first as Nick Chubb caps off 7 minute drive vs. Ravens (10/2022): The Browns strike first against the Baltimore Ravens as Nick Chubb scores his eighth touchdown on the season

Video: Nick Chubb NFL Combine throwback posted by Browns social media (02/2022): With the Combine next week, video flashes back to Chubb's time there including behind the scenes interview time from the Browns featured back:

Nick Chubb, Browns come to terms on three-year extension worth $36.6 million, pe (08/2021): The two-time Pro Bowl running back is signed through the 2024 season

Nick Chubb on contract extension talks: 'I feel like Cleveland is where I want t (06/2021): Chubb wants to remain with the Browns into the future

Browns' Nick Chubb, Kareem Hunt trying to join this list of teammates to rush fo (12/2020): Hunt and Chubb are on the verge of history while pacing the offense for the 8-3 Cleveland Browns

Nick Chubb crushes gamblers who bet on Browns by stepping out of bounds at 1-yar (11/2020): The decision made by the Browns running back locked in a three-point win for Cleveland

Browns can still have NFL's best rushing attack -- even without Nick Chubb (10/2020): The Browns' rejuvenated ground game is about more than one player. And that's why it will continue to be so tough to stop.

Browns' Nick Chubb clears concussion protocol, returns to practice ahead of Week (08/2020): The third-year Pro Bowler spent most of the week sidelined

Kevin Stefanski excited to work with Nick Chubb, Kareem Hunt: Browns' new coach (01/2020): Chubb and Hunt were one of the NFL's best running back duos in the second half of the season

Browns' Nick Chubb on fumbling issues: I've 'got to learn from it and get better (10/2019): Chubb fumbled the ball twice on Sunday to help the Patriots get out to a big lead