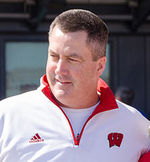 Paul Joseph Chryst (born November 17, 1965) is an American football head coach and former player. He is currently the head football coach for the Wisconsin Badgers. In his six seasons to date at Wisconsin, only five NCAA teams have more wins than Chryst. Chryst was the head coach at the University of Pittsburgh from 2012 to 2014. Prior to his head coaching career, Chryst had previously been the offensive coordinator at Wisconsin from 2005 through 2011. He also served in the same capacity at Oregon State University and was an assistant coach for the San Diego Chargers of the National Football League. Chryst played college football at Wisconsin, where he lettered as a quarterback and tight end from 1986 to 1988. More about Paul Chryst

Current items with a signature of Paul Chryst

These are the most current items with a signature of Paul Chryst that were listed on eBay and on other online stores - click here for more items.

Traded items with a signature of Paul Chryst

The most expensive item with a signature of Paul Chryst (Wisconsin Badgers PAUL CHRYST Signed Full size Schutt Helmet AUTOGRAPHED COA) was sold in November 2022 for $159.00 while the cheapest item (U of PITTSBURGH coach PAUL CHRYST autograph HAND SIGNED 8 X 10 LOT#61) found a new owner for $0.99 in February 2017. The month with the most items sold (5) was February 2017 with an average selling price of $57.75 for an autographed item of Paul Chryst. Sold items reached their highest average selling price in November 2022 with $159.00 and the month that saw the lowest prices with $0.99 was January 2017. In average, an autographed item from Paul Chryst is worth $34.99.

Most recently, these items with a signature of Paul Chryst were sold on eBay - click here for more items.

Big Ten Week 6: Previews, Predictions, and Best Bets for the Biggest Games of th (10/08/22): Betting stats are provided by BetMGM.* Takeaways from Week 5 Last week answered some questions in the Big Ten – namely, that Michigan is the real deal, Wisconsin’s athletic department has had enough, and Michigan State is worse off than we thought. The biggest news of the week is Paul Chryst’s surpr

Leipold 'happy' at KU as Wisconsin rumors swirl (10/04/22): Despite his deep ties to Wisconsin, Kansas football coach Lance Leipold insists he has "no plans on going anywhere" following the firing of Badgers coach Paul Chryst.

Wisconsin to pay Chryst an $11 million buyout (10/04/22): Paul Chryst, who had approximately $20 million left on his contract, will receive a reduced payout after being fired by Wisconsin on Sunday.

College football coaching carousel: Ranking best Power Five jobs available after (10/2022): Two of the highest-profile Big Ten jobs are currently on the table, but only one stands as best available

Here’s how many Badgers have been drafted in the Paul Chryst era (04/2022): The Badgers have sent a number of players to the next level under Chryst

Wisconsin hires Sheridan and alters roles for Bostad, Turner (02/2022): MADISON, Wis. (AP) Wisconsin has hired Bill Sheridan to coach inside linebackers as one of three changes to Paul Chryst's staff. Chryst also announced Tuesday that Bob Bostad is switching from inside linebackers coach to offensive line coach and Mickey Turner is moving from tight ends coach to an

Wisconsin RB Mellusi out remainder of season (11/2021): Wisconsin leading rusher Chez Mellusi will miss the remainder of the season because of a leg injury, Badgers head coach Paul Chryst announced on Thursday.

Badgers dismiss RB Crawford, suspend Roberts (08/2021): Wisconsin has dismissed freshman running back Loyal Crawford from the team after police said he armed himself with a knife during a fight in a dorm. Coach Paul Chryst also said Tuesday that freshman running back Antwan Roberts had been suspended.

Wisconsin cancels game at Nebraska after 12 test positive for COVID-19, includin (10/2020): Coach Paul Chryst is among those who have tested positive

Purdue-Wisconsin Preview (11/2019): No. 12 Wisconsin plays host to Purdue in its regular-season home finale on Saturday at Camp Randall Stadium in Madison, Wis. A victory puts the Badgers on a collision course with Minnesota a week later. Head coach Paul Chryst won't allow Wisconsin (8-2, 5-2 Big Ten) to look beyond Purdue.

Wisconsin-Ohio St. Preview (10/2019): Ryan Day has an idea of how Wisconsin coach Paul Chryst feels right now. Unassuming Illinois sneaked up on the then-No. 6 Badgers last week and likely ruined what was starting to look like a steady climb into College Football Playoff contention. Both times the inexplicable midseason defeats cut de