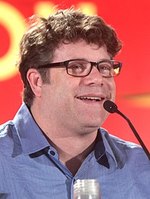 Current items with a signature of Sean Astin

These are the most current items with a signature of Sean Astin that were listed on eBay and on other online stores - click here for more items.

Traded items with a signature of Sean Astin

The most expensive item with a signature of Sean Astin (GOONIES photo cast signed by ALL Sean Astin Josh Brolin more auto with quote) was sold in May 2021 for $699.99 while the cheapest item (SEAN ASTIN SIGNED 8X10 RUDY LORD OF THE RINGS GOONIES) found a new owner for $0.01 in March 2010. The month with the most items sold (5) was March 2008 with an average selling price of $149.99 for an autographed item of Sean Astin. Sold items reached their highest average selling price in December 2020 with $249.99 and the month that saw the lowest prices with $0.99 was March 2017. In average, an autographed item from Sean Astin is worth $62.00.

Most recently, these items with a signature of Sean Astin were sold on eBay - click here for more items.

Here's what Sean Astin did while he was in Tampa on Tuesday (03/25/15): Actor Sean Astin, best known for his roles in “The Lord of the Rings” and “The Goonies,” attended the Gasparilla International Film Festival kick off Tuesday evening, but he did a couple other things while he was in town.

Sean Astin coming to Gasparilla film festival (02/03/15): All together now: "Rudy … Rudy … RUDY!" Or "Samwise!" if you're more into Tolkien than touchdowns. Maybe "Mikey!" if you're a Goonies fans.

Sean Astin hopes to make 'huge' international movie (11/2014): Washington, Nov 12 (ANI): Sean Astin recently revealed that he is planning to make his first feature, an adaptation of Lois Lowry's best-selling children's book 'Number the Stars' and hopes that it will be a "huge international title."

Pure Flix Completes Principal Photography on “Do You Believe?” Starring Mira Sor (10/2014): Largest independent faith and family studio announces much anticipated follow-up to “God’s Not Dead” – “Do You Believe” slated for theatrical release in Spring 2015. (PRWeb October 28, 2014) Read the full story at http://www.prweb.com/releases/2014/10/prweb12281781.htm

Choices — Sean Astin encourages students to explore opportunities (08/2014): A hushed crowd at the Kibbie Dome grew utterly silent at Friday morning’s Convocation ceremony, as award-winning actor Sean Astin stepped into the persona of his “Lord of the Rings” character, Samwise Gamgee. “It’s like in ...

Sean Astin on new role in FX’s The Strain (07/2014): Sean Astin talked to Steve Cochran about his new role in the FX horror series The Strain. Steve also asked Astin what he’s most remembered for: Rudy, The Goonies or Lord of the Rings?   …

Sean Astin 'Rings' in a busy year with a visit to Wizard Con Philly (06/2014): The Latin phrase "vox populi" translates to "voice of the people." It's also the name of Sean Astin's political radio show, which urges bipartisan civil discourse.

Lord of the Rings Actor, Sean Astin: Christians Have Made Things Difficult for T (05/2014): Known best for his role as Sam in The Lord of the Rings trilogy, Christian actor and current star of the recently released Moms' Night Out, Sean Astin said part of Christians' frustrations with the film industry may be their own fault.

Sean Astin, Tim Curry & Russell Peters joins KRU animation (04/2014): Actors are in the new 3D animation by KRU Studios, "Ribbit" which will be in cinemas this September

Interview with Sean Astin: actor, director, producer, and writer (03/2014): Sean Astin, who is best known for his role as Samwise Gamgee in The Lord of the Rings , is not only an actor but also a producer, a director, an author, and an avid runner. read more

Photos: Sean Astin joins Sun Run for Bostonians (04/2013): Check out the various colours of Sean Astin, known for his role as Samwise Gamgee in Lord of the Rings. Astin will join the Sun Run this Sunday in support of Boston Marathon victims.