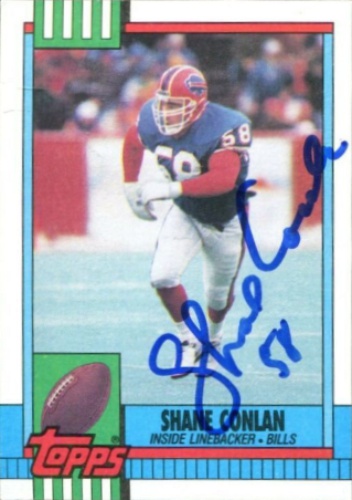 Shane Patrick Conlan (born March 4, 1964) is a former professional American football player. He played college football at Penn State University, where he won two national championships in 1982 and 1986, although he was red-shirted prior to the start of the 1982 season and did not play that season. In 1981, prior to his Penn State career and after his senior season at Frewsburg High School in which he played under head coach Thomas Sharp, Conlan was voted Western New York high school Player of the Year. During his career at Penn State, Conlan had 274 tackles, including a school-record 186 solos. He finished his football career as a three-time all-pro with the NFL's Buffalo Bills and the Los Angeles/St. Louis Rams. More about Shane Conlan

Current items with a signature of Shane Conlan

These are the most current items with a signature of Shane Conlan that were listed on eBay and on other online stores - click here for more items.

Traded items with a signature of Shane Conlan

The most expensive item with a signature of Shane Conlan (FRAMED BUFFALO BILLS SHANE CONLAN AUTOGRAPHED SIGNED JERSEY JSA COA) was sold in December 2021 for $259.00 while the cheapest item (1990 Topps Football Shane Conlan Signed Card) found a new owner for $0.01 in April 2017. The month with the most items sold (34) was October 2008 with an average selling price of $10.50 for an autographed item of Shane Conlan. Sold items reached their highest average selling price in July 2015 with $104.00 and the month that saw the lowest prices with $0.01 was October 2011. In average, an autographed item from Shane Conlan is worth $5.99.

Most recently, these items with a signature of Shane Conlan were sold on eBay - click here for more items.

Hall of Famer Shane Conlan, wanted by nobody but Tom Bradley in 1982, a recruiti (05/23/14): In an age when college football recruiting barely had video and no easy way to transmit it, small-town hero Shane Conlan was neglected by everyone except one D-I assistant who made the effort to see him in-person.

Shane Conlan, Derrick Williams bring star power to Travers golf tourney in May (04/2014): The two former Penn Staters have committed to the fourth annual benefit golf tourney, scheduled for May 9 at Blue Ridge. Registration is under way for the afternoon event.

This Birthday in Buffalo Sports History: Shane Conlan (03/2012): March 4, 1964 - It's always a nice story when a local high school players reaches the pros in his home area. Shane Conlan was such a player.