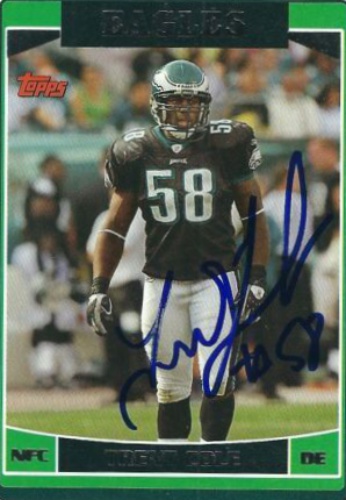 Trent James Cole Jr. (born October 5, 1982) is a retired American football defensive end and outside linebacker. He played in the National Football League (NFL) for twelve seasons, primarily with the Philadelphia Eagles as well his final two with the Indianapolis Colts. Cole played college football for the University of Cincinnati, and was drafted by the Eagles in the fifth round of the 2005 NFL Draft, where he played with them from 2005 until 2014 and was a two-time Pro Bowler. More about Trent Cole

Current items with a signature of Trent Cole

These are the most current items with a signature of Trent Cole that were listed on eBay and on other online stores - click here for more items.

Traded items with a signature of Trent Cole

The most expensive item with a signature of Trent Cole (AUTHENTIC FULL SIZE TRENT COLE #58 PHILADELPHIA EAGLES SIGNED HELMET RIDDELL) was sold in July 2014 for $300.00 while the cheapest item (2005 EAGLES TEAM AUTO SIGNED PHOTO TRENT COLE HOOD REID) found a new owner for $0.99 in September 2009. The month with the most items sold (15) was January 2009 with an average selling price of $12.00 for an autographed item of Trent Cole. Sold items reached their highest average selling price in July 2014 with $300.00 and the month that saw the lowest prices with $2.61 was August 2009. In average, an autographed item from Trent Cole is worth $17.50.

Most recently, these items with a signature of Trent Cole were sold on eBay - click here for more items.

Schoolchildren to perform alongside Brendan Cole at the Regent (02/19/19): Youngsters at the North Staffordshire academy are busy practising for the production

Cole Hamels on MLB offseason market: 'This is tough to see' (02/16/19): Cole Hamels was very nearly a part of the MLB free agency process this winter and he weighed in on the frozen offseason.

Sources: Colts add ex-Eagles LB Trent Cole (03/10/15): Trent Cole has agreed to a contract with the Indianapolis Colts, sources have confirmed to ESPN.com.

Frank Gore, Trent Cole to sign with Colts, who also could get Andre Johnson (03/10/15): Indy was expected to be a big free agent player, and it is.

Trent Cole says he's open to restructuring his contract to stay with Eagles (12/2014): Cole is due $11.625 million next season but will be paid $1.6 million regardless of whether or not he is on the Eagles roster.

Eagles linebacker Trent Cole mic'd up vs. Tennessee Titans and makes some noise (11/2014): Congratulations! Your weather is set to . You can change the location at any time. Don't have an account?

5 Observations from Wednesday's Eagles practice with notes on Darren Sproles and (10/2014): Congratulations! Your weather is set to . You can change the location at any time. Don't have an account?

Trent Cole thinks he has a lot left in the tank (06/2014): The Eagles moved Trent Cole from defensive end to linebacker last season and Cole seemed to find his footing at his new position over the second half of the season. Cole had eight sacks in the second half of the season, which seemed to convince the Eagles that they didn’t need to hit the free…

Trent Cole could be Eagles cap casualty (01/2014): Philadelphia might have to part ways with one of its better defensive players. The Philadelphia Eagles have a very important offseason ahead of them, and with that comes some tough decisions.

Upon Further Review: Trent Cole continues second-half surge (12/2013): Trent Cole is having quite a second half of the season. He and the Eagles argued that he was effective in the first half, but Cole seems to be adjusting more steadily to this season's move from defensive end to outside linebacker.

Transition puts pressure on Trent Cole (10/2013): Trent Cole is a proud man who has made his living sacking the quarterback as a defensive end.

Trent Cole gets shot to expose former Eagles teammate (09/2013): The Chargers' 6-foot-9 left tackle will be none other than King Dunlap. He'll be charged with the task of protecting Philip Rivers' blindside and blocking the Eagles' Trent Cole.

Billy Davis likes what he sees from Trent Cole, Brandon Graham in coverage (08/2013): When the decision was made to switch from a 4-3 defensive alignment to a 3-4, Davis knew that getting both Graham and Cole comfortable in there new roles would be key to the success of the switch.

Trent Cole Is Learning New Areas Of The Field (07/2013): There’s been something strange going on at Eagles’ training camp. Something that Eagles’ fans have seen sporadically over the years, though not as frequently as they may see in the Eagles’ new 3-4 defensive alignment this year.

Eagles' DC Billy Davis 'impressed' with Brandon Graham and Trent Cole at OLB (05/2013): Cole and Graham have spent their professional careers as hands-on-the-ground defensive ends. In the Eagles' new defense, they're stand-up linebackers, asked to drop in coverage in ways they never imagined.

Is Trent Cole making turkey bacon? (04/2013): No word yet on whether he is in the employ of a certain turkey bacon company.

Victor Butler's potential effect on Eagles LBs Brandon Graham and Trent Cole (03/2013): The Eagles are intent on heading to minicamps and training camp stocked with outside linebackers for their new 3-4 defense. Cole and Graham's future with the Eagles would not be affected by Butler’s signing, according to a league source.

How Antonio Dixon, Brandon Graham, and Trent Cole would fit in a 3-4 (02/2013): INDIANAPOLIS -- If the Eagles switch to a 3-4 defense, it's expected that Fletcher Cox and Mychal Kendricks will be able to adjust. But there are more questions about other players on the roster.

5 questions with ...Trent Cole (12/2012): Fifth-round pick from the University of Cincinnati and two-time Pro Bowl defensive end Trent Cole signed a four-year contract extension this year that could keep him with the Philadelphia Eagles through the 2017 season.

Letter: Philadelphia Eagles' Trent Cole sets good example (09/2012): On Aug. 26, my husband and I took our girls to the Eagles Flight Night at Lincoln Financial Field. It was a nice experience and all for a good cause, to support the Eagles Youth Partnership.

Trent Cole weighs in on Eagles LT battle (08/2012): Since he has lined up across from both men in training camp, Pro Bowl right end, Trent Cole, was asked Thursday for his thoughts on King Dunlap and Demetress Bell, who are battling for the Eagles’ starting left tackle job.