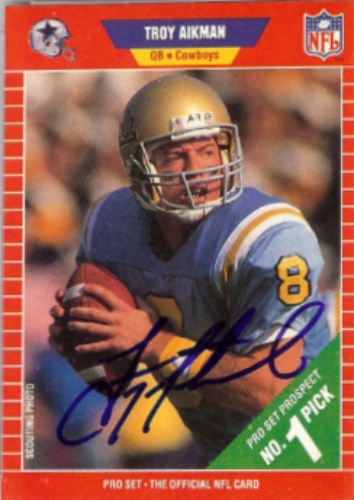 Troy Kenneth Aikman (born November 21, 1966) is a former American football quarterback who played in the National Football League (NFL) for 12 seasons with the Dallas Cowboys. After transferring from Oklahoma, he won the Davey O'Brien Award at UCLA and was selected first overall by the Cowboys in the 1989 NFL Draft. As the Cowboys' longest-tenured quarterback, Aikman received six Pro Bowl selections and won three Super Bowl titles from 1992 to 1995. Aikman was also named MVP of Super Bowl XXVII, the franchise's first title in over a decade. He was inducted to the Pro Football Hall of Fame in 2006 and the College Football Hall of Fame in 2008. More about Troy Aikman

Current items with a signature of Troy Aikman

These are the most current items with a signature of Troy Aikman that were listed on eBay and on other online stores - click here for more items.

Traded items with a signature of Troy Aikman

If you're interested in Troy Aikman Rookie cards you might want to take a look at our sister site that specializes in Football Rookie Cards only.

Most recently, these items with a signature of Troy Aikman were sold on eBay - click here for more items.

Troy Aikman says he’s proud to have started an anti-Pro Bowl trend by leaving ea (02/03/23): During the 1993 Pro Bowl, Cowboys quarterback Troy Aikman played only part of the game and didn’t stick around until the end, explaining that he had a flight to catch and couldn’t stay in Hawaii. That didn’t go over well with the league office at the time, but Aikman believes he did the right thing.

Troy Aikman: Tom Brady, Bucs will be ‘dangerous’ Monday night (01/13/23): Hall of Famer Troy Aikman breaks down why Tom Brady and the Tampa Bay Buccaneers shouldn't be taken lightly against his Dallas Cowboys

Tom Brady turns 45 today, so it's time to feel old and unaccomplished (08/2022): Marveling at 45-year-old Tom Brady, who has more passing touchdowns since turning 40 than Troy Aikman did in his entire career.

Troy Aikman talks candidly about his thoughts on future front office role with C (04/2022): While still employed in the booth, Aikman isn't ruling out a transition to a front office role in some capacity. Could that happen in Big D? | From @CDBurnett7

Can the $100m duo of Joe Buck and Troy Aikman save ESPN’s Monday Night Football? (03/2022): The broadcaster’s flagship show has had a rocky recent history. The company is looking for stability rather than fireworks from its new duo in the booth Joe Buck and Troy Aikman have a long-standing broadcasting partnership. Photograph: Matthew Emmons/USA Today Sports The streaming wars have come fo

Report: John Lynch met with Amazon, will stay with 49ers (02/2022): Amazon is taking over the Thursday Night Football package this season and their search for an announcing team is one of many things leading to a game of musical chairs in NFL broadcast booths. There was word that they had eyes on plucking Troy Aikman away from Fox Sports, but it looks like Aikman wi

This one Tom Brady comment from the offseason 'shocked' Troy Aikman and the Hall (06/2021): Cowboys legend Troy Aikman was extremely surprised by something Tom Brady said this offseason

Troy Aikman approves of Cowboys decision to hire Dan Quinn as defensive coordina (01/2021): The Dallas legend is giving the hire a thumbs up, with a caveat

Cowboys legends Troy Aikman, DeMarcus Ware aim pointed criticism at team's effor (12/2020): This is a bad look for the Cowboys, but they're earning every bit of the criticism

Troy Aikman: Dak Prescott 'will get paid' in 2020, Cowboys will sign him to long (05/2020): The Hall of Famer believes it's just a matter of time before Dallas pays its QB

Cowboys legends Jimmy Johnson, Troy Aikman weigh in on team's lack of sixth Supe (01/2020): The two Hall of Famers key in on what ails their former team, and if it's been repaired

Cowboys' Jerry Jones responds to Troy Aikman's criticism: 'He would do it exactl (12/2019): Aikman isn't one to hold his tongue, but neither is Jones

Troy Aikman: Eagles paid Wentz, Rams paid Goff, Cowboys still haven’t paid Dak (11/2019): Former Cowboys quarterback Troy Aikman is unsure what's taking so long for current Cowboys quarterback Dak Prescott to get paid. Aikman said on KTCK/1310 that he thinks the Cowboys are probably putting doubts in Prescott’s mind about how much faith they have in him by not paying him the way the Eagl

Fantasy Football Week 14 Sleepers at Every Position (12/2018): At this point in the fantasy football season, with the playoffs either just around the corner or already underway in many leagues, sleepers are both less and more important than ever...

Troy Aikman on concussions and Borland's retirement (03/2015): In the wake of the Chris Borland retirement, Hall of Fame former QB and Fox broadcaster Troy Aikman?who suffered multiple concussions as a pro...

Troy Aikman Explains Why The Patriots Should Get A Historic Punishment (01/2015): Former Dallas Cowboys quarterback and current...

Tony Romo surpasses Troy Aikman for new Cowboys record (12/2014): With many flicks of the wrist, quarterback Tony Romo became the all-time leading passer for the Dallas Cowboys during Sunday's game against the Indianapolis Colts.

UCLA band celebrates Troy Aikman as his jersey is retired (11/2014): Troy Aikman had a storied career at UCLA, and the Bruins paid tribute to the FOX Sports announcer Friday by retiring his No. 8.

Column: In Lions' victory, FOX's Troy Aikman praises Golden Tate but Matthew Sta (10/2014): A little Sunday Morning Football (American style) was a nice diversion from the political talk shows and what a show the Lions put on with a come-from-behind 22-21 victory over Atlanta in Wembley Stadium on FOX.

McCollum's Column: So why is Troy Aikman's former QB coach at Nicholls State? (09/2014): Steve Axman said his wife considered himself retired. He merely thought of himself as out of work. He still is dazzled by the crazy change of events that, in less than two weeks, led him from Arizona to Thibodaux, La.

Troy Aikman and Joe Buck starred in a Fox Sports telenovela that was a little we (08/2014): You weren't dreaming. That really happened.

Failed Texas House candidate Chart Westcott says tardy appeal by Troy Aikman was (07/2014): He said the campaign "completely shut down" after the runoff and he will return any checks that voters send.

Troy Aikman: Cowboys' defense 'can't possibly be as bad' as last year (06/2014): Dallas Cowboys legend and Hall of Famer Troy Aikman offers his thoughts on the direction of America's Team.

Troy Aikman “concerned” about Tony Romo’s second back operation (04/2014): Two procedures worry the former Cowboys' QB, who retired at 34 because of back issues.

Deadspin Up All Night: Run Like Troy Aikman (03/2014): Thank you for your continued support of Deadspin. Stay safe. Read more...

In the Now: Troy Aikman (02/2014): Football Hall of Famer Troy Aikman is on a mission to get everyone to pitch in for the community. And he's getting help from other Cowboys greats.

Serby’s Sunday Q&A with Troy Aikman (12/2013): Former Cowboys quarterback and FOX broadcaster Troy Aikman tossed around some Q&A with Post columnist Steve Serby: Q: The atmosphere in and around Dallas for Cowboys-Eagles? A: I do believe...

Joe Buck And Troy Aikman Wish You A Happy Thanksgiving (11/2013): Send stories, photos, and anything else you might have to tips@deadspin.com . Read more...

Sorry, Haters, Troy Aikman Thinks Tony Romo Can Lead Cowboys To A Super Bowl (02/2013): “I think the fans get excited each year because they know that this team is capable of doing something,”’ Aikman said. “I believe most fans recognize (of Romo), ‘Hey, this guy’s really gifted.’

Troy Aikman's Ex Wife Rhonda Tried To Use His Name To Prevent Arrest (08/2012): Rhonda Aikman tried to GUILT police officers into letting her off the hook during her drunk in public arrest by throwing around the name of her famous ex-husband Troy

Former Dallas Cowboys Troy Aikman, Emmitt Smith take part in Tyler leadership co (05/2012): Tyler was selected as the host city because the Express Employment Office does more business than any of the other 600 Express branches in North America.

Tony Romo says Troy Aikman is in higher class of QBs (04/2012): Tony Romo was flattered by the compliments of Troy Aikman, who believes (seriously) Romo is a better player than he was. But Romo made it clear Tuesday he doesn't see himself in Aikman's class.

Troy Aikman Says NFL Will No Longer Be No. 1 (02/2012): Former NFL all-star and Hall of Famer Troy Aikman said that the NFL will not always be the top sport in America.

Troy Aikman and Wife Officially Divorced! (11/2011): Former Dallas Cowboys NFL player Troy Aikman and his wife, Rhonda, are officially divorced. In January of this year, the now football commentator on Fox news was rumored to have separated with his wife . . .

Troy Aikman Request Privacy After Announcing Separation From Wife (01/2011): Troy Aikman - Hall of fame quarterback Troy Aikman confirmed with Dallas Morning News that he and his wife Rhonda were separating after just over 10 years of marriage. In the same breath, the Fox football analyst asked for some privacy.