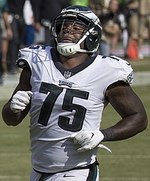 Vincent Curry (born June 30, 1988) is an American football defensive end for the New York Jets of the National Football League (NFL). After playing college football for Marshall, he was drafted by the Philadelphia Eagles in the second round of the 2012 NFL Draft, with whom he won Super Bowl LII. More about Vinny Curry

Current items with a signature of Vinny Curry

These are the most current items with a signature of Vinny Curry that were listed on eBay and on other online stores - click here for more items.

Traded items with a signature of Vinny Curry

The most expensive item with a signature of Vinny Curry (Philadelphia Eagles Authentic Helmet autographed by DE Vinny Curry #75) was sold in January 2018 for $145.00 while the cheapest item (Vinny Curry Rookie RC NFL 2013 Panini Playbook Autograph #34/140 signature) found a new owner for $0.39 in April 2022. The month with the most items sold (4) was September 2019 with an average selling price of $15.13 for an autographed item of Vinny Curry. Sold items reached their highest average selling price in February 2021 with $79.99 and the month that saw the lowest prices with $0.39 was April 2022. In average, an autographed item from Vinny Curry is worth $19.99.

Most recently, these items with a signature of Vinny Curry were sold on eBay - click here for more items.

Jets activate DE Curry from IR ahead of game vs Packers (10/15/22): FLORHAM PARK, N.J. (AP) The New York Jets activated defensive end Vinny Curry from injured reserve Saturday after he sat out the first five games with a hamstring injury. The 34-year-old signed with the Jets in March 2021, and could finally make his debut with the team Sunday at Green Bay. Curry

Jets put Vinny Curry on IR, sign Marcell Harris (09/01/22): Defensive end Vinny Curry returned to the Jets after missing last season with a blood condition and he made the cut to 53 players this week, but he won’t be on the field against the Ravens in Week 1. The Jets announced that Curry has been placed on injured reserve Thursday. Curry has been dealing [m

How a life-threatening ordeal gave the New York Jets' Vinny Curry perspective (05/27/22): A year after surgery that sidelined him for a season, the 33-year-old Curry is back and more determined than ever.